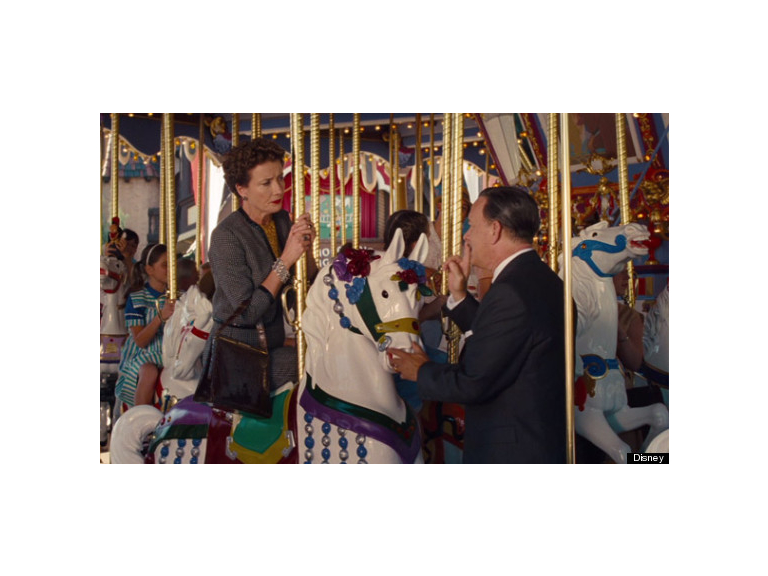 If only we got to find out the real story of where more of the great stories came from, the world would be a better place, and Saving Mr Banks, now at Cineworld Cinema Shrewsbury is a real gem.

Savine Mr Banks is not about Jane and Michael  - the kids. Nor is this film for children, it has a far more adult tone is infact the story of saving an uptight Mr Banks from his "bank-shaped cage" and reconnect him with what really matters – his family.

This is the central thrust of Saving Mr Banks, a lovely, sentimental and quietly insightful account of the making of Mary Poppins that traces the roots of PL Travers's most famous creation to the author's personal own past.

Swapping between her childhood in Australia and her later life in London, we see the young Helen Goff (the real name of P L Travers played by Emma Thompson), being both enchanted and traumatised by her banker father Travers (Colin Farrell), an alcoholic dreamer with an wonderfully juvenile streak.

The meat of this tale takes place in late 1960s California, where Tom Hanks's tough but endearing Walt Disney is attempting to convince Emma Thompson's brilliantly snippy "Mrs Travers" to sign over the rights to her most treasured creation.

Having promised his children that he would bring "our beloved Mary" to the screen, Walt finds himself being snubbed, scolded and generally sniped at by the author who repeatedly says that "Mary Poppins – never just 'Mary' – is not for sale!".

The film takes us across the full spectrum of emotions from the wonderful comedic timing of Thompson (who gives an absolutely, 100% Oscar-worthy performance in this role) and the daily battles she endures with the film's musical directors, to heart-wrenchingly sad scenes of P L Travers's childhood, where we see Farrell's character unravel. (Farrell incidentally, also gives a performance, unlike any I have ever seen him give before.)

The Blind Side director John Lee Hancock juggles the affectionate and the abrasive with ease, creating a scrumptious confection.

Travers actively disliked Disney's movie, but no matter; ultimately, they didn't make it for her. If you a)weren't a fan of any of the actors in this film before you saw this movie, particulary the amazingly talented Thompson, or b)have never let the absolute charm, romance and pure story-telling dynamite of Disney's Mary Poppins wash over you before, you soon will.