Shropshire-based caravan and motorhome dealership Salop Leisure and Hawk Plant Hire have announced their sponsorship of Hawkstone International Motocross (HIMX), which is expected to attract thousands of spectators and 120 of Europe’s top riders on February 5.

Held at the famous Hawkstone Park circuit, the event has become one of the biggest international motocross races on the calendar as riders use it as a good pre-season shake down before the British Championships kick off.

As there will be no Motocross Grand Prix in Britain this year due to the MX of Nations at the end of the season, the Hawkstone International will be a rare chance to see some of the world’s best riders on British soil in 2017.

Among the local riders competing are Henry Williams from Welshpool who is stepping up to MX2 this season after winning his championship last season and James Angel from Wem a top six contender in the MXY2 class. 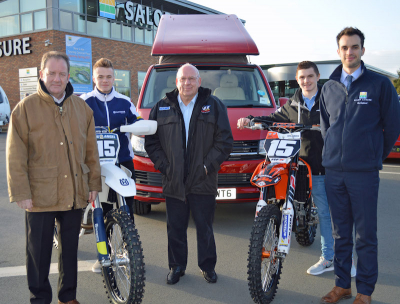 Salop Leisure’s marketing manager Ed Glover said the company was delighted to be associated with the HIMX and looked forward to promoting caravanning to thousands of motorcycle enthusiasts.

HIMX chairman Dave Williams said it was the ninth time the largest international motocross event in Europe was being held at Hawkstone Park. “The continued support of Salop Leisure, Hawk Plant Hire and other sponsors is very important because the event costs around £90,000 to stage every year,” he added.

Tickets are only available to buy on the gate at £30 for adults, including a free race programme and under 14s are free. Camping is £20 per pitch for a motorhome, tent or caravan, while onsite parking is free. Visit  www.hawkstoneinternationalmx.com for more information