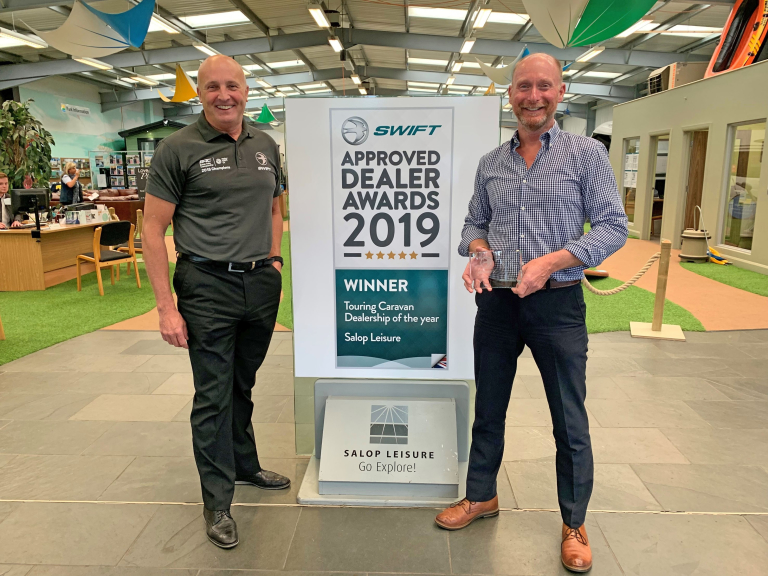 Shropshire-based caravan and motorhome dealership Salop Leisure completed a notable double at the Swift Group’s annual awards which are decided by votes from customers.

The company, which has sales centres in Shrewsbury, Machynlleth and Stourport-on-Severn, won the large touring caravan dealership of the year for the second year running while touring caravan sales executive George Harris won the customer service recognition for sales.

Marking the end of the third year of Swift’s Approved Dealer Programme, launched in September 2017, the annual awards recognise the accomplishments delivered by dealers. The programme is built around eight customer-centric key performance indicators which are monitored throughout the year.

“It’s a fantastic accolade to everyone employed in the business, but as a dealership and industry we still have a lot to do to reach the increasing expectations of customers,” said Mark Bebb, Salop Leisure’s managing director.

“We are committed as a dealership to investing in training in customer service and to work closely with the Swift Group to further improve standards.”

He also praised Mr Harris for his award.  “Having worked with George for more than 10 years, I am delighted that he has received this personal accolade. He is undoubtedly the most exceptional salesperson I have worked in terms of the way he looks after customers.”

The company employs more than 20 staff in the service department, five of whom work at weekends when it’s more convenient for customers to have their caravans serviced or repaired.

Mr Harris, whose office at Salop Leisure is filled with ‘thank you’ cards and postcards from customers, said he was “delighted and overwhelmed” to win the award. He felt that all his hard work and attention to detail, when looking after customers, had been recognised.

“The award is the result of the comments my customers have submitted to Swift over the last 12 months about the way they were looked after,” he said. “To have this feedback is really wonderful.

“I love my job and am passionate about customer service. I love helping customers with their caravans not just as a salesperson but as a friend.”