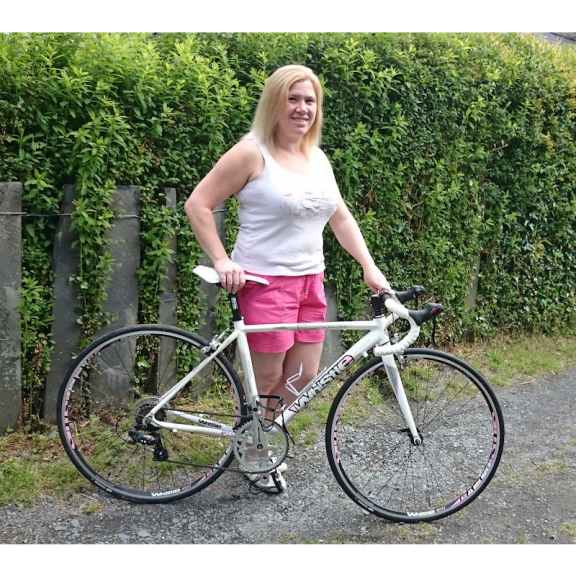 A pledge made at Christmas to support a friend who has been treated for breast cancer has resulted in Michelle Clarke preparing to take on her first triathlon next month.

Michelle, a 37-year-old mum of three from Corris, near Machynlleth, has entered the Glan Mor Aberdyfi Triathlon on July 5, which involves a one mile open water swim in the Dyfi estuary, a 40 kilometre bike ride and a 10 kilometre run.

It’s quite a challenge for someone who could swim only a length of the pool at Machynlleth Leisure Centre at Christmas. Due to the support of her triathlete husband, Stephen and members of Cerist Triathlon Club, she can now swim 90 lengths.

Nervous about the challenge ahead, Michelle said: “I think I’m a bit of an idiot to say I’d do it, but the sense of achievement will be massive and it’s just one day in my life. My husband has offered to go around with me but I declined because I don’t want the extra pressure.”

She has agreed to take on the challenge to support Kim Brett, an instructor at Cerist Triathlon Club and personal trainer, who was diagnosed with breast cancer in 2013 and received treatment at the chemotherapy unit at Bronglais Hospital, Aberystwyth.

Michelle will be raising money for the chemotherapy unit and has so far raised more than £1,000 thanks to the generosity of her workmates at caravan dealership Salop Leisure, caravan park owners and managers, family and friends.

“If you were to look at me, you would probably think that I am the most unfit and unlikely person to do a triathlon because I’m about two and a half stone overweight,” said Michelle, who has been a sales executive for Salop Leisure in Machynlleth for seven years.

“I actually decided at Christmas to do the triathlon to support Kim and I was stone cold sober at the time! My husband is a triathlete and I usually go along as a marshal.

“I know so many people that have suffered with cancer over the years so I agreed to support Kim and raise money for the chemotherapy unit at the same time. The support I have had from workmates at Salop Leisure and caravan parks has been brilliant.”

Anyone wishing to sponsor Michelle can contact her at Salop Leisure in Machynlleth on Tel: 01654 705900 or email: michelle.clarke@salopleisure.co.uk