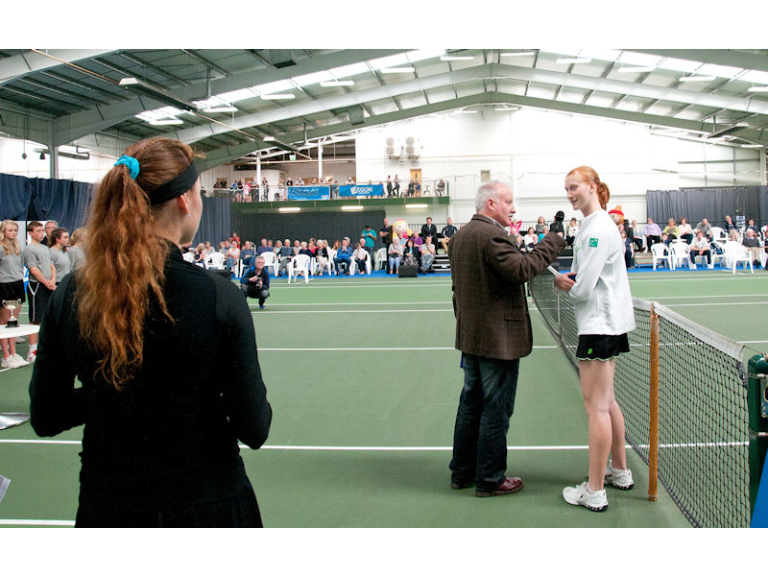 Rising stars of European tennis are heading to Shropshire as The Shrewsbury Club gears up to host a prestigious professional women's tournament.

Qualifying for the $25K Aegon GB Pro-Series event gets under way at the Sundorne Road venue on Sunday with the first round draw to be held during a civic reception next Monday.

Local tennis fans will then be treated to a feast of top class action throughout the week leading up to the final on Saturday, September 20.

The tournament has successfully been held at The Shrewsbury Club several times with many of the players to have taken part in the past now recognisable names in the sport.

German star Sabine Lisicki, who has since been runner-up at Wimbledon, is the most notable player to have competed in the Shrewsbury event while current top ranked British players including Laura Robson and Heather Watson have also played in the county town.

Julie Piper, LTA tournament director, said she was looking forward to returning to Shrewsbury and that local tennis fans had much to look forward to.

"It is a pleasure to be returning to Shrewsbury," she added. "We have always received a warm and friendly welcome and I am sure this year will be no different.

"Both The Shrewsbury Club with its excellent facilities and the town itself are very popular with the players on the ITF pro-circuit and over the years the event has attracted a high calibre of player, many of whom have gone on to bigger and better things on the WTA Tour."

Dave Courteen, managing director of The Shrewsbury Club, said he was delighted the venue continues to prove so popular with the LTA, adding the club were proud to have been asked to act as hosts once again.

"We are always pleased to be invited to host high profile tennis tournaments by the Lawn Tennis Association and we have established close links with them," he said.

"They recognise the strength of our facilities and we always endeavour to make the tournaments bigger and better every time we stage one."

Apart from the high standard of tennis on offer, which can be enjoyed by spectators free of charge, Mr Courteen stressed there are also wide ranging positives for the town of Shrewsbury from hosting top level sporting events.

He said: "The players are accompanied by their coaches, physios and supporters while we also host over 40 officials, referees and line judges so we believe the tournaments we host are a valuable asset to the town.

"The spin off benefits in terms of accommodation, restaurants and attractions is significant.

"In addition, the town gets profiled through media coverage and the matches are streamed live via the web to countries throughout the International Tennis Federation so the marketing benefits to local tourism is also high.

"The bidding process to win these tournaments from the LTA gets tougher. We want to make this tournament bigger than before and demonstrate that the whole town is supportive so we will be holding a formal civic reception at The Shrewsbury Club for all the players on the first Monday of the event, September 15.

"Qualifying will be completed by then and we will hold the draw for the first round which starts the next day to add to the sense of occasion."

The tournament will coincide with The Shrewsbury Club hosting a sporting dinner on Friday, September 19 with the guest speakers BBC television sports presenter John Inverdale and Michael Downey, the chief executive of the Lawn Tennis Association.