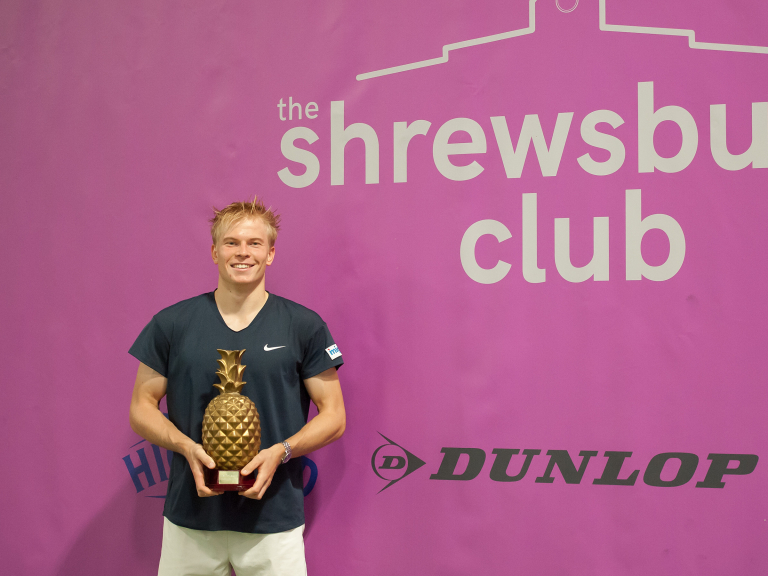 Rising stars Anton Matusevich and Sonay Kartal underlined their exciting potential as they were crowned UK Pro League champions in front of a capacity crowd at The Shrewsbury Club.

Matusevich, from Kent, beat Henry Patten 6-2, 6-4 in the men’s final before Kartal, from Brighton, impressed in getting the better of Freya Christie 6-0, 6-1 in the women’s final.

Their victories earned both players £15,000 in prize money as they followed in the footsteps of Emma Raducanu and Liam Broady, winners of this event when it was held for the first time in Surrey last year.

“A big crowd, which was very nice, a good atmosphere,” he said. "Probably one of the best matches I’ve played in the week.

"I still need to improve my technique on a few shots, but I was really locked in, really focused, moved well, served okay, returned very well. Happy today.”

Matusevich did not lose a set in winning all five matches he played during the week at The Shrewsbury Club’s indoor courts.

"I’ve been very focused and also indoor hard is one of my best surfaces,” he said.

Kartal had beaten two of the players handed wild cards to compete this week, higher ranked Lily Miyazaki and Beth Grey, in the two previous rounds.

She impressed once again in the final against Christie, who had previously featured in three ITF finals at The Shrewsbury Club.

Kartal said: “I’m just happy I kept my level. I think it was probably the best tennis I’ve played all week actually.

"Normally in the final it’s not really the case. You tend to get a bit tight and sometimes the occasion can really get to you, but I was happy with my level.

"I think I played very consistent and I took the match to her really today.”

Kartal, who plans to quickly return to action at an ITF tournament in Tunisia later this week, relished playing in front of the Shrewsbury crowd.

“The crowd today was obviously by far the best,” she said. "I think it was a sell-out, so it’s nice to be back to some kind of normality.

“The atmosphere with the music played at the change of ends and everything, I think this whole week has been amazing, and I’ve loved playing here.

“It’s the first time playing at The Shrewsbury Club, so only fond memories so far.”

Dave Courteen, The Shrewsbury Club’s managing director, said he was delighted that UK Pro League Finals Week, including finals day, had been such a huge success.

“It’s been a fantastic day,” he said. "It’s very exciting for the club to have an event that’s been so widely televised live across so many different channels throughout the week.

“We were delighted to have a sell-out crowd and it was great to have two really good finals.

“I think we’ve seen players today that are going to go on and have careers in tennis that will probably see them get into the top 100 in the world.

“Credit to the two winners. Both Anton Matusevich and Sonay Kartal just played fantastic tennis - and all four finalists have played some wonderful tennis all week.

“It’s been a really successful week and it’s a credit to the town and the county that we are able to attract such high quality events.

“We are hugely grateful to the local sponsors who got on board with us to make it all happen.

“Now we hope to have an ITF event in February - we’re just waiting for final confirmation.”

He said: "The welcome from The Shrewsbury Club, from the members, from the volunteers, the staff here, has been absolutely fantastic.

"I know the players have really, really appreciated it. Then to see so many people turn up to watch, it’s been really special.

“It’s been a great week and a fitting conclusion to the season.”