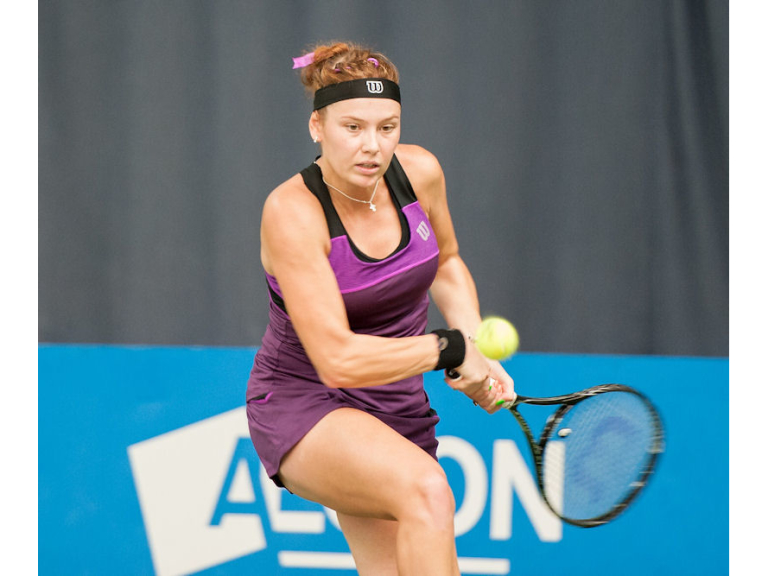 In-form German ace Carina Witthoeft eased through to the second round of the $25,000 GB Pro-Series tournament at The Shrewsbury Club as she sets her sights on another singles title - but last year's runner-up Marta Sirotkina suffered a shock early exit.

There was good news for promising British teenager Harriet Dart, 18, as she followed up her two victories in the qualifying rounds by impressively beating Lithuanian Lina Stanciute 7-5, 5-7, 7-5 to book her place in the last 16 of a tournament featuring a host of rising stars from across Europe.

Hamburg-born Carina, 19, has rocketed up to 132 in the latest world rankings after winning both of the last two tournaments she's entered.

Having claimed victory in the $25K GB Pro-Series event in Barnstaple earlier this month, she followed it up by winning a $50K tournament in Saint-Malo in France last week.

Seeded three in Shrewsbury, Carina signalled her intent to maintain her excellent run of form by sweeping aside the challenge of Croatian Ana Vrljic in straight sets 6-2, 6-3 in front of a good sized crowd.

Pleased with how she played, Carina, paying her first visit to Shrewsbury, said: "The first round is always tough because it's a new tournament and last week I played on clay so it's very tough to then go on to a hard court, but I'm happy that I won.

"Every round is tough and different and they are all good players, they all can play tennis, but I will try my best."

The ambitious young German added she wants to keep moving up the rankings: "This week I'm 132. My goal is top 100. I will try to reach it before the Australian Open so I can play in the main draw. I need 100 more points to get there and that's difficult, but I will try."

The big surprise of the first round was the exit of last year's runner-up, Russian Marta Sirotkina, seeded four this week, who lost 6-3, 6-0 to French player Oceane Dodin, more than 400 places below her in the world rankings.

Elsewhere, No 1 seed Cagla Buyukakcay overcame fellow Turkish player Pemra Ozgen, losing just a single game in the process. They had teamed up to win the doubles event in Shrewsbury last year.

The action continues at The Shrewsbury Club with the second round matches starting at 10.30am. Admission is free.