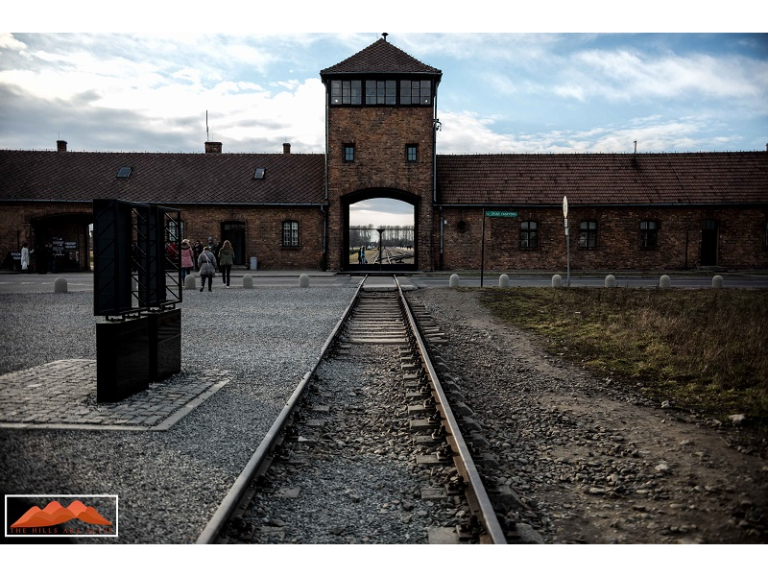 Two students from Shrewsbury College have visited the sites of Nazi death camps in Poland as part of an Auschwitz project.

The students, who say the experience is one they will never forget, were among around 200 students and teachers from across the country, who spent the day touring Auschwitz concentration camp and Auschwitz Birkenau death camp, where 1.1 million people were murdered during World War 2.

The visit was organized by Holocaust Educational Trust through its Lessons from Auschwitz project.

The government funded trust, was set up to raise awareness of the horrific past events, and also teach students about current world politics and events where genocides, fascist ideologies, isolation and mass murdering of groups of people are still happening today.

Computing student, Yasmeen Green, 19, whose two great aunts died in Auschwitz during World War 2, volunteered to take part in the project along with 17 year old Catering student, Connor Pritchard. She said: “Although this was a personal experience for me, during the visit I was so shocked by the harrowing realism of the camps that my thoughts were with each person who died there, not only my family.

“The camps were every bit as distressing as we’d expected, but it was at night where it really became spine-chilling.

“There was a stark difference between camp 1 and camp 2 – the ‘death camp’. There were no bits of clothing, children’s dolls, or abandoned items like there were in camp 1. Instead it was completely isolated and empty and felt like what it was, a mass grave.

“I’ve found it hard talking to anyone about our visit and I haven’t known where to start. I took pictures throughout the trip, and have captioned each of them - that has been my way of conveying my thoughts and feelings.”

Connor added: “The camps were shocking and being in the middle of a huge area of burnt down buildings made it all really hit home how horrible what happened was - I found the remains of human hair the most upsetting part.

“We need to make sure this never happens again and we, as a nation, and a world need to be able to talk openly about it.

“Since returning from Auschwitz I’ve wanted to tell everyone I know about it, and make them aware of just how terrible it is. We all grow up learning about World War 2 and the Nazis, but I think the haunting reality of the camps and how people can be swayed into believing and thinking certain things isn’t really mentioned enough.”

The project started with a seminar in Birmingham where the students from across the country came together and met with a holocaust survivor.

The aim now, is for the students to take their experiences and promote what they have learnt about the holocaust to their peers, in particular to organize a local event for the Holocaust Memorial Day, in early 2017.

Lorraine Burrage, said: “This project is really important for our students to understand and help raise awareness of a big part of recent history. Yasmeen and Connor have taken to it all with real passion and maturity and I know that they will do as much as they can as Ambassadors of the Holocaust Educational Trust to help raise awareness.”