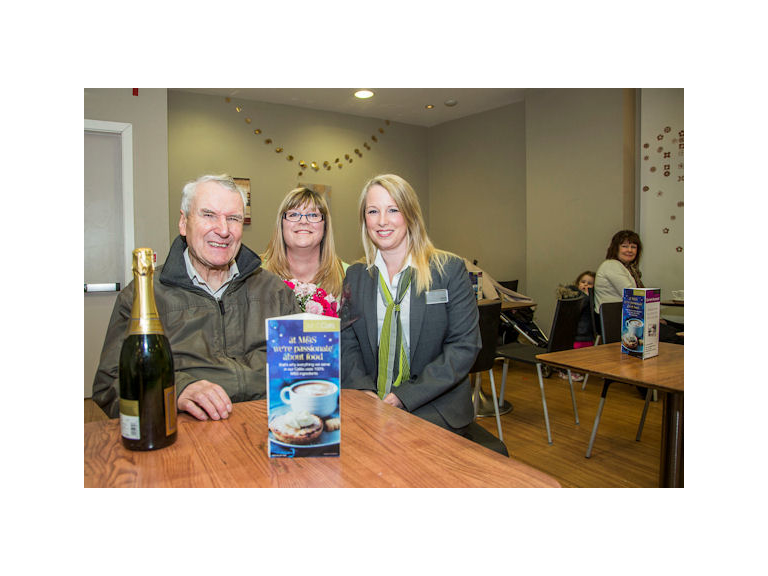 A café worker with a heart of gold has been nominated for a top award by Marks and Spencer in Shrewsbury after two decades of voluntary work.

Vicky Moore says that in 1993 her mum put her name forward when blind piano teacher and tuner, Edward Wilkins, of Shrewsbury, was looking for a driver so he could get to appointments.

Vicky, who has worked as a customer service advisor in the café at the M&S store in Shrewsbury’s Darwin Centre for the past 10 years, says she thought she’d help Edward out for a couple of months.

But, 20 years on, she still spends two days a week driving him to appointments and says she thoroughly enjoys what she does.

She said: “My daughter, Charlotte, was learning to play the piano and we called Edward out to tune my mum’s piano which Charlotte was using to learn on.

“That was 20 years ago. And he told us he was looking for a driver to take him to piano tuning appointments.

“My mum decided to volunteer me and two decades on I’m still driving Edward around to his appointments. I used to take him more than two days a week but I had to reduce it when I got the job at M&S in the café here at the Darwin Centre.

“Now, on Tuesdays and Fridays, the days I don’t work in the café, I take him out to his appointments. I’m even a dab hand now at helping him change strings.

“However, I haven’t got a musical bone in my body and you wouldn’t want to hear someone play a piano I’d tuned!”

Ruth Hart, Food Manager at M&S in the Darwin Centre, said: “We nominated Vicky for the 'Pride of M&S Award' as we felt that through her voluntary work she has gone the extra mile to make M&S proud.

“The award aims to celebrate and reward the achievements of our colleagues who have made a difference through incredible courage, determination and initiative together with celebrating all that is good about M&S.”

Vicky added: “Being Edward’s driver is something I really enjoy. It’s voluntary, although he does cover the petrol we use.

“He’s a lovely man and I really do find my days driving him around quite relaxing. I get a lot of satisfaction from it and he is a real gentleman.

“I have the best of both worlds really as I love working in the café, the customers are really friendly and I’m part of a great team. I can actually say I look forward to going to work which is a nice way to be.”

However, Edward Wilkins will lose his dedicated driver for more than a month next year as Vicky is heading Down Under.

She said: “Charlotte moved out to Cairns, in Australia, three years ago and my mum and I are going out to see her, and her partner, for the first time early next year.

“I can’t wait to see her. She initially went to New Zealand and came home before saving up and going back out but to Australia. She’s now training to be a nurse.

“It will be so emotional seeing her again. I have a son, David, 24, and he still lives at home with me but I really miss seeing Charlotte.”

Edward, 86, a retired music teacher at the College for the Blind, says Vicky has been a wonderful driver for him.

He said: “I can get about as I do have a guide dog but, as I still tune pianos right across Shropshire and surrounding counties, I need someone who can get me to appointments.

“I always feel safe with Vicky she is calm and unhurried and it’s always a smooth drive. She’s actually excellent at putting new strings on a piano and like many women she’s neat and something of a perfectionist.

“Music means a lot to me and I have always enjoyed piano tuning and have no intention of stopping as I feel perfectly fit and able. Having Vicky to drive me though is just superb. She is so reliable and has never let me down.”

Vicky added: “It was a real shock to see someone had nominated me for the Employee of the Year Award.

“It’s nice being recognised for what I do even if, for me, it’s nothing special. M&S is a wonderful company to work for and I really enjoy being part of a fantastic team.”

Kevin Lockwood, Manager of the Darwin, Pride Hill and Riverside Shopping Centres, said: “Vicky is part of a great team at M&S in the Darwin Centre and she still finds time to help out someone like this.

“It’s great the way the store have recognised her for her efforts and that those efforts have enabled Mr Wilkins to carry on with a profession that clearly gives him so much pleasure.”