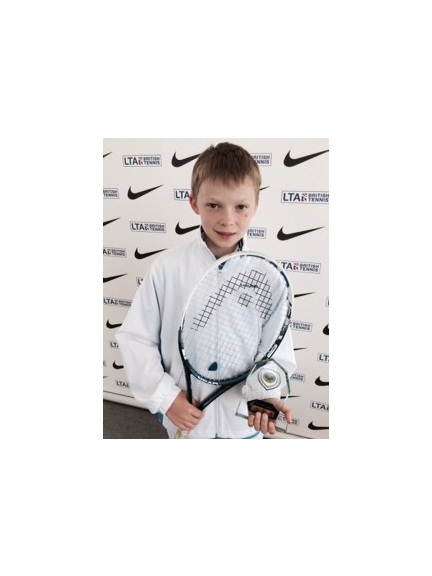 National success continues to come the way of up and coming Shropshire tennis ace Roan Jones after he impressively claimed another prestigious title.

Roan, a junior member at The Shrewsbury Club, hit the heights once more to be crowned winner of the 10U class at the National Clay Court Championships at Hatfield's Queenswood School in Hertfordshire.
The talented 10-year-old, who was national 9U champion at the same event last year, underlined his exciting potential with a series of classy displays on the green clay courts which he knows well given it's the same surface he often trains on at The Shrewsbury Club.
Roan eventually beat Lui Maxted from Sussex 4-0, 0-4, 10-7 in an energy-sapping final.
"Roan had to contend with some difficult, windy conditions at Queenswood," said his dad, Stuart. "The physical training work that he's been doing with Darren Ruff, his strength and conditioning coach at The Shrewsbury Club, really helped him.'
The Condover Primary School pupil has now won both of the summer national tour events he has entered this year which puts him top of the 10U national leaderboard.
Roan, who emerged victorious at the Scottish Junior Open Championships at Glasgow in May, will play one more national tour tournament at The University of Bath next month before competing in the national finals play-off at Bournemouth in August.
Roan trains at The Shrewsbury Club most days with his coach, Slovakian Jaro Novak, while the Sundorne Road venue's other coaches also help his development.
Nigel Hunter, director of tennis at The Shrewsbury Club, said Roan has a great attitude to the sport and always plays with a smile on his face.
Roan quickly followed up his latest individual triumph by helping Shropshire win their regional group in the 10U County Cup.
He lined up alongside two more players from The Shrewsbury Club, Rory MacDonald-O'Brien and Tomas Cores-Birch, plus Matthew Campbell from Wrexham HPC.
Shropshire did not lose a match in beating Staffordshire, Herefordshire & Worcestershire and North Wales.
That set up a crucial winner takes all decider against fellow unbeaten side South Wales. Shropshire opened up a 2-1 lead in the singles before Roan and Rory sealed victory with a 4-1, 5-4 doubles success.
Roan's dad, Stuart, added: "The team supported each other very strongly and noisily. They get on together famously which really helps when the pressure is on."
The Shropshire youngsters will now travel to Bolton for the National County Cup Finals on June 14 and 15.
Pictured: Roan Jones with the trophy he received for winning the 10U class at the National Clay Court Championships.
The Shropshire team which have booked a place in the National County Cup Finals, from left: Matthew Campbell, Rory MacDonald-O'Brien, Tomas Cores-Birch and Roan Jones.
More