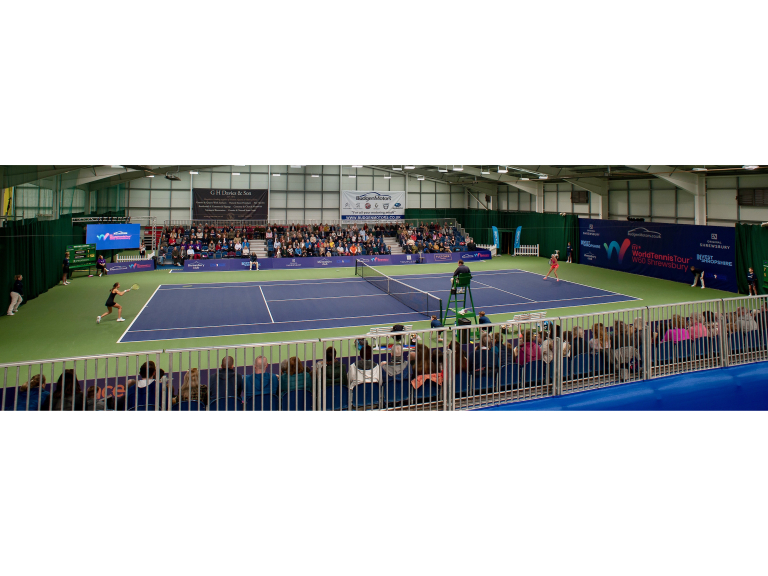 Professional tennis returns to Shrewsbury this month with $25,000 men's tournament.

Players from across Europe will be heading to the town to take part in a $25,000 men’s event between Monday, September 23 and Saturday, September 28, when the singles final takes place.
It will be the first men’s event staged on the indoor courts at the Sundorne Road venue since February 2018, although The Shrewsbury Club has since twice hosted women’s events, including a $60,000 tournament earlier this year.
Admission will be free for spectators throughout the week to watch rising stars of professional tennis competing in the International Tennis Federation tournament.
The main draw acceptance list has been announced and includes up and coming British player Jack Draper, 17, who reached the boys’ singles final at Wimbledon in 2018, and Evan Hoyt, 24, a quarter-finalist in the mixed doubles, partnering Eden Silva, at this year’s Wimbledon Championships.
Both players are currently ranked around 350 in the world as they continue to move in the right direction.
Draper has played at The Shrewsbury Club before, winning a junior tournament in 2013, and lifted two $25,000 Futures titles earlier this summer, shortly after playing in the men’s doubles in the main draw at Wimbledon.
Aidan McHugh, who is mentored by Andy Murray, is among the other Brits on the provisional entry list, which also features experienced Illya Marchenko, from Ukraine, who was ranked as high as 49 in the world in 2016.
Dave Courteen, the managing director of The Shrewsbury Club, said: “It’s always exciting to see the main draw acceptance list for the first time and, while things can change with the schedule of players, there’s some very exciting players among the provisional entries.
"There will always be players appearing here in Shrewsbury that will go on to significantly climb the rankings.
“Two of our former men’s champions in recent years have done that as Frenchman Quentin Halys has been just outside the top 100 while Yannick Maden, another former winner from Germany, broke into the top 100 earlier this year.
“We have not had a British winner in the men's singles event here since Dan Evans in 2013 - and look how well he's done since - while both Marcus Willis and Ed Corrie have since reached the final.”
The Shrewsbury tournaments are always well supported by local tennis fans - with Dave hoping that will be the case once more with free admission from the qualifying rounds through to the final.
"We want this to be a festival of tennis,” he added. “We want it to be a chance for people who have not perhaps had the opportunity to watch professional tennis before to come and have a look. The standard and quality of matches is exceptionally high.
“Court-side stands will be in place from the middle of the week, with viewing available from the club’s balcony which overlooks the courts before that.
“These tournaments are always well attended - we love hosting them - and we are delighted with the support we receive from local people."
More