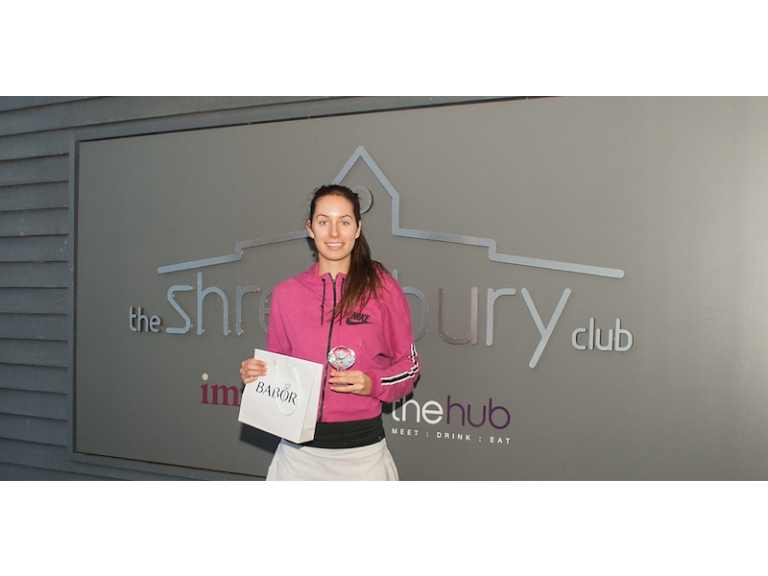 French ace Oceane Dodin became the first player to win the Aegon GB Pro-Series at The Shrewsbury Club twice as she impressively made it back-to-back titles in the town.

The 19-year-old from Lille was delighted to overcome the brave challenge of British qualifier Freya Christie to win a high quality final 7-6, 7-5 in front of a record Shrewsbury crowd.

"I'm very happy," said Dodin. "This is a very amazing tournament, the best for me, and I'm very happy to win this tournament twice - and maybe come back again next year."

Dodin, playing her final tournament of a productive 2015, will now take a short break before starting to prepare for the Australian Open early next year.

Nottingham-based Christie, who only turned 18 earlier this month, pushed Dodin all the way as she relished the opportunity of playing in her first-ever $25,000 final, an entertaining clash which lasted one hour and 47 minutes.

Christie said: "It was a really close match and a couple of points here and there could have changed the match completely - but I gave 100 per cent."

Dodin had triumphed as a qualifier at Shrewsbury last year, so it was ironic that, having made a popular return to Shropshire to defend her title as the event's top seed, she should find herself meeting Christie, who had reached the final this year via the same route.

Recovering from a break down in the opening set, Christie had a set point, but Dodin came up with a winner and the player currently ranked 149 in the world held her nerve to edge the ensuing tie-break.

With both players hitting the ball with great pace, it was one of the best finals seen in Shrewsbury, with Christie - the first Brit since Heather Watson four years earlier to grace a Shrewsbury final - once again giving an excellent account of herself, just as she had in her six previous games throughout the week.

Dodin may be just a year older but, eventually, her greater experience, which saw her play in the main draw at three Grand Slams this year, reaching the second round at both the Australian Open and US Open, where she beat former world No 1 Jelena Jankovic, saw her prevail after winning the second set 7-5.

Christie could take comfort from a hugely impressive performance at Shrewsbury which will see her continue to head in the right direction and significantly climb from her current career-best world ranking of 531.

Richard Joyner, the tournament director for the Lawn Tennis Association, said: "It has been a great week of tennis. The Shrewsbury Club really does go the extra mile in making the players feel welcome, and I know they really appreciate the great atmosphere which is created throughout the week.

"The number of spectators has been steadily growing and this year’s final saw a record crowd. The quality of tennis in the final was a tremendous way to finish the week."

Pre-match entertainment ahead of the final included British Fed Cup captain Judy Murray appearing on court with Tennis Shropshire girls while there was also a performance from a dance troupe before the players were warmly welcomed.

Dave Courteen, the managing director at The Shrewsbury Club, hailed the quality of the tournament and thanked Shropshire tennis fans for supporting the event in such impressive numbers.

He added: "It's been a brilliant week. The fact that Freya Christie, an exciting up and coming British player, reached the final was great and it was lovely that Oceane Dodin wanted to come back and defend her title.

"The crowds have been bigger this year and it feels that the town has embraced the tournament with more people coming to watch the tennis which is excellent.

"What's also important is we work so hard to use this as a great opportunity to promote tennis in the county.

"We had over 100 school children here at the club on Friday, 50 on Thursday, all part of our tennis programmes we run in school, which is sponsored by Budgen Motors, so that's been excellent.

"Having Judy Murray come along was also a real coup and it all adds up to making this a great week in our calendar."

Professional tennis will return to The Shrewsbury Club in February with a men's Aegon GB Pro-Series $10,000 tournament.