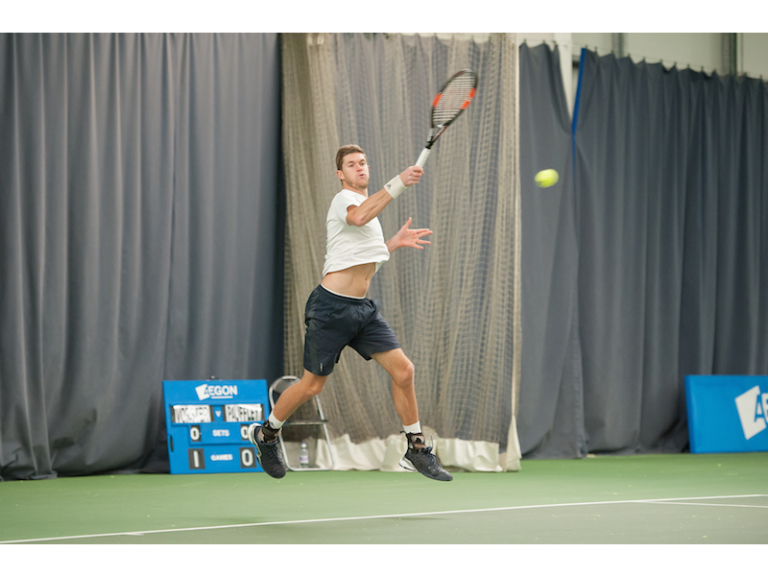 British player Neil Pauffley delivered the shock of the day in the first round of the Aegon GB Pro-Series tournament at The Shrewsbury Club by knocking out No 1 seed Tucker Vorster.

Pauffley, currently ranked 555 in the world, produced an excellent display to overcome South African Vorster 6-2, 7-5 in the $10,000 event at the Sundorne venue.

Vorster, 295 in the world rankings, some 260 places higher than Pauffley, had no answer to the 25-year-old from Berkshire, who is now looking forward to facing fellow Brit Luke Bambridge - a 6-0, 6-1 conqueror of qualifier Oliver Hudson - in today's second round.

Pauffley said: "When I first saw the draw I thought 'oh, not the No 1 seed again' because I normally tend to draw high seeded players, but I played a good match and it was good to get through it.

"It's a big boost. It gives me a lot of confidence definitely beating players like this. It's just trying to keep it going now and get the consistency going match after match."

As for now taking on fellow Brit Bambridge, Pauffley added: "It's tough to play people you know because you see them week in, week out pretty much, but it will be nice and we all get on well together."

Second seed Liam Broady, who reached the second round at Wimbledon last summer, signalled his intent to follow up his tournament victory in Glasgow earlier this month by sweeping aside the challenge of Joshua Ward-Hibbert, a close friend, 6-2, 7-6.

No 3 seed, Maxim Dubarenco, from Belarus, accounted for Brit Jay Clarke 6-1, 6-4, while David Rice, another Brit, competed well before going down 7-6, 7-5 to Italian Stefano Napolitano, seeded four this week.

Admission to the tournament is free all week, including to Saturday afternoon's singles final. Today's second round matches start at 10.30am.