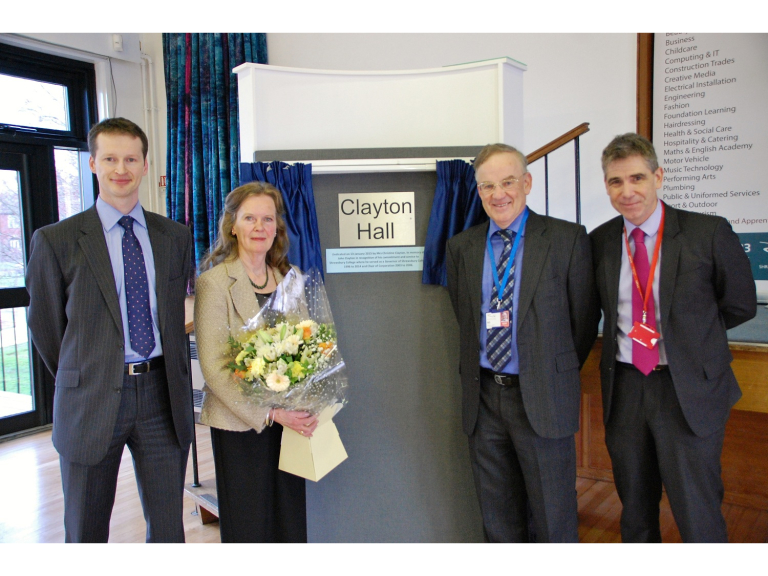 Shrewsbury College held a private event to dedicate its new exhibition and events space as the ‘Clayton Hall’ this week.

The space, which is available to be used by the community, charities, businesses and other organisations as well as the College, was named after former Governor, John Clayton, who was first appointed to the Corporation in December 1996. He served the College for 18 years before he sadly passed away in March last year.

Mr Clayton served on several College committees during his service and was heavily committed to many other local business and community enterprises. He was appointed Vice Chair of the College Corporation in November 2001 - to Nov 2003 and served as Chairman from November 2003 - 2006.  He was then again appointed Vice-Chair until his death in March last year.

The dedication of the Hall saw Governors, College staff and members of the Clayton family gather, with Mr Clayton’s wife, Christine, officially unveiling the plaque.

Mrs Clayton, said: “At many different levels John encouraged business development and educational achievement in Shropshire, and he recognised that he had benefitted from a good education to University level.

“This made him aware of the opportunities that can be within reach, and he was therefore keen to help others develop to their full potential through training and education.

“The College became close to his heart and he would have been delighted, if not a little embarrassed, to know that the hall was to be dedicated to his memory. His family wishes the College well with its valuable work in the future.”

Speaking at the ceremony, current Chair of the Corporation, Iain Gilmour, said: “John gave me a very warm welcome when I joined the Corporation here at the College many years ago.

“Typically, he was at pains to help me understand as much as possible about the Corporation, and of course it’s estate, which was so dear to his heart.

“Enthusiasm absolutely characterised John. Whether it was in business, in public life, in his beloved vintage car racing or here in the College, he was the most positive of people and he has been sorely missed by us all.

“In particular, he was the most enthusiastic supporter of the recent three-phase major investment in the renovating and extending College’s facilities and it is a terrible shame that he did not live to see its final completion.

“It seems entirely fitting, therefore, that the reinstated hall you see before you should be dedicated to his memory and act as a permanent reminder of his presence here among us.”