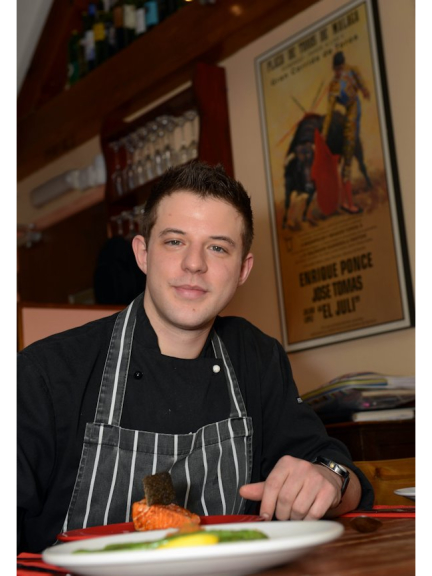 Bijou Shrewsbury tapas restaurant Casa Naranjo is celebrating the arrival of creative young chef Ben Gilbert, who brings with him his own style of creative cooking and a mouthwatering Spring menu.

Ben, who is 26 years old and lives in Shrewsbury, has cooked for the likes of Robert Plant and Warwick Davis.

The talented young foodie was born and bred in Bridgnorth and attended Oldbury Wells Secondary School.  His interest in cookery was sparked at the tender age of 14, when his sister was waitress at Bella Roma in Bridgnorth, which is now Casa Ruiz.

To earn pocket money he washed pots there, until the day the chef rang in sick and Ben was given a golden opportunity to hold the fort and prove what he'd learnt in kitchen.

Ben went on to work at Bridgnorth’s Old Castle Pub aged 16, where he was already competently doing his own food ordering and managing staff rotas.

Not wanting to miss a moment’s cooking, Ben gained his qualifications whilst continuing to work as a chef, so that he could remain hands-on in kitchen.

At 18 he took a Sous Chef job at The Habit in Bridgnorth, where he met waitress girlfriend Emma. The couple then moved together to work for a year at Casa Ruiz in Bridgnorth - Ben as Sous Chef and Emma Front of House.

Ben has since switched to the corporate side of the food industry cheffing at The Holiday Inn, Telford.  Here he learnt the organizational and managerial skills to enable him to take the Head Chef job at Casa Naranjo.

Ben explained: “I was hunting for a hands-on, creative job so I snapped up the job at Casa Naranjo.  I love the Authentic Tapas Group Team and couldn’t wait to get creative with the menu.  Spain is top of the culinary arts at the moment and I am relishing working with fresh local ingredients and the finest Spanish ingredients that are specially imported.

“Iberico Pork is the best pig to work with, fed purely on acorns - you just can't get anything close to it in the UK.  It’s tender, full of flavour - you can't get the same cuts from anything else.  The oils in the acorns create the perfect fattiness.”

Ben’s future plans include helping to continue the growth of Casa Naranjo and carry on his travel all over the world to remain inspired in the kitchen.