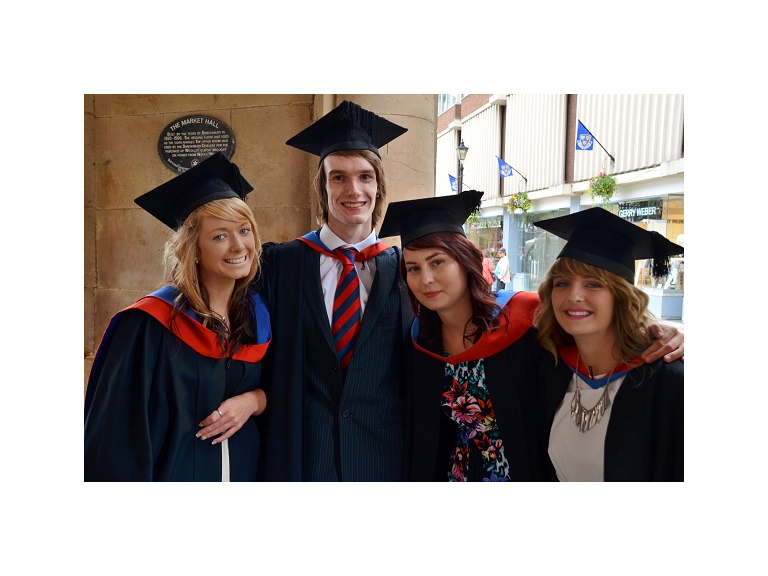 This year, the College has seen 142 students graduate from a range of degree-level courses, with almost 100 taking part in the parade and awards ceremony.

The parade processed from the Square in an array of traditional colours at 2.30pm led by the Mayor of Shrewsbury, Councillor Beverley Baker.

The graduation ceremony in St Chad’s Church started at 3pm and Professor Michael Gunn, Vice-Chancellor of Staffordshire University, one of the College’s affiliate universities, was the special guest speaker.

Before the ceremony, students from Performing Arts joined together in song to celebrate the year’s successes and to bid farewell to those graduating.

The students performed choral arrangements of well-known songs from West End productions, such as Once, Little Women and West Side Story, alongside a four-piece orchestra.

Steve Wain, Principal of Shrewsbury College, said: “We have been offering higher education (HE) courses at the College for nearly 20 years. It’s an absolutely fantastic achievement for these students to be graduating from their HE courses and the parade is a real rite of passage before they go on into their future careers.

“In September we have a range of new HE courses starting, many of which are part-time and can be fit around work or family commitments. We are offering an exciting place to study HE locally and in some cases free tuition loans are available or students aged 24 or over may be eligible for the 24+ learning loans which don’t have to be paid back until you are earning £21,000 or over. There has never been a better time to study locally.”

Gillian Jepson, 52, from Telford is graduating from her Fashion HND, said: “I wanted to go to university when I was younger but at the time was unable to. My daughter has recently graduated from Cardiff University where she studied Fashion, so I decided now was the time for me.

“I have worked for the civil service for 31 years so this was a big change for me.  But I have always had a passion for sewing, knitting and the crafts. Being able to study the HE course at Shrewsbury College has given me an enormous amount of self-satisfaction, by being able to do what I enjoy doing.

“It has been challenging at times, but for me, the only failure would be not trying. I would encourage anyone considering the course at Shrewsbury College to go for it!”

Kai Cannon, aged 19, from Kidderminster, is graduating from HND Performing Arts, he said: “Studying Higher Education at Shrewsbury College has allowed me to achieve the goals that I set for myself. I have been dancing professionally since I joined a dance school when I was six, so before attending the College I always saw dancing as my strongest attribute, now however, after two years of intense Performance training, I feel my acting abilities are just as strong.

“I looked at a lot of other places before deciding on Shrewsbury College and I put an awful lot of thought into what course to do and where. Ultimately I think it was the atmosphere at this College which helped me to make the decision to study here. I have to travel over two hours each day from Kidderminster, and have done so for two years, but it has definitely been worth it.

Getting the chance to study HE in an intimate environment, with smaller classes has definitely benefitted the quality of my education. I will be pursuing a career in performing Arts by joining an agency and starting to audition for roles.”

For more information on the Higher Education Courses at Shrewsbury College starting in September, please call Course Advice on 01743 3423411 or clickhere