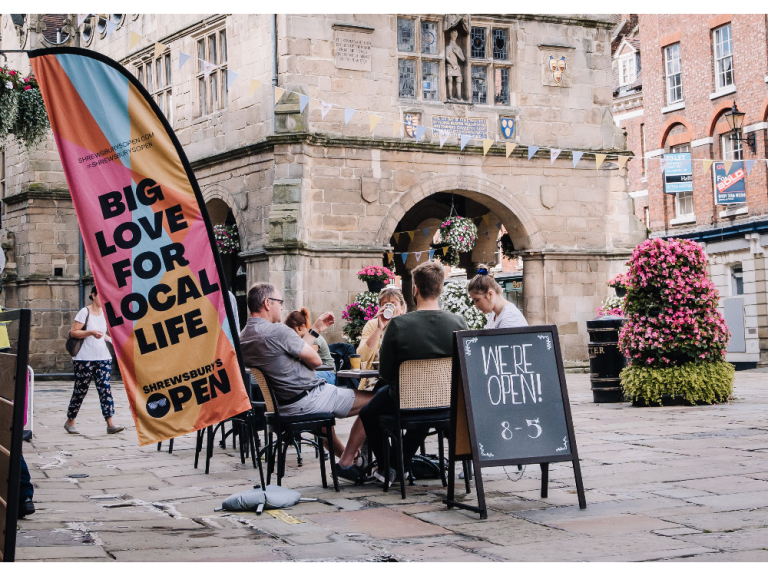 Visitor numbers in Shrewsbury town centre grew much faster than the national average during the summer - following the trend of successful “multifunctional towns” across the country.

With a range of measures in place to ensure the town is safe, such as High Street being closed to traffic during the day to allow social distancing, footfall steadily rose throughout August.

Figures independently recorded by Springboard for Shrewsbury BID showed that footfall during the last week of August was 82% of last year’s level, compared to a national average of 67%.

A study by the High Streets Task Force published in early September showed that towns like Shrewsbury saw a smaller drop in visitors compared to cities, with people keen to visit their local town for a wide range of activities.

Experts at the Task Force, commissioned by Government in 2019 to support the transformation of England’s high streets, said multifunctional towns, such as Shrewsbury, fared better during the Covid-19 crisis.

According to their research, footfall in smaller district centres fell by 34.5% from March 1 to June 30 2020, compared to a drop of 75.9% in larger cities over the same period.

Professor Cathy Parker, research lead of the High Streets Task Force and Professor of marketing and retail enterprise at Manchester Metropolitan University, said: “The historic decline in footfall we’ve seen doesn’t mean that all high streets are failing. It shows that their function is changing.

“Our research indicates that during and after lockdown, local high streets have been people’s lifeline, for essential retail and services, and as a gateway to local parks and green space. People are rediscovering their local areas and rethinking what they want from their high streets.”

Councillor Peter Nutting, leader of Shropshire Council, said the partnership work undertaken by the Shrewsbury Recovery Taskforce had made a big impact on the town centre.

“Everyone has worked together to make the town centre safe and welcoming for people in the wake of the Covid-19 outbreak,” he said.

“It’s been really encouraging to see the many positive comments we have received from locals and visitors alike about how positive and vibrant the town has felt over the summer.”

Councillor Alan Mosley, leader of Shrewsbury Town Council, added: “It’s good to hear that similar towns, which are valued by their local community for providing a rich variety of benefits as well as purely being a retail centre, have seen a positive increase in footfall.

“Shrewsbury is very much safe to visit - social distancing is in force and shops are maintaining the necessary hygiene measures - and we hope people will continue to support their local town centre.”

Shrewsbury officially one of the happiest places in the UK