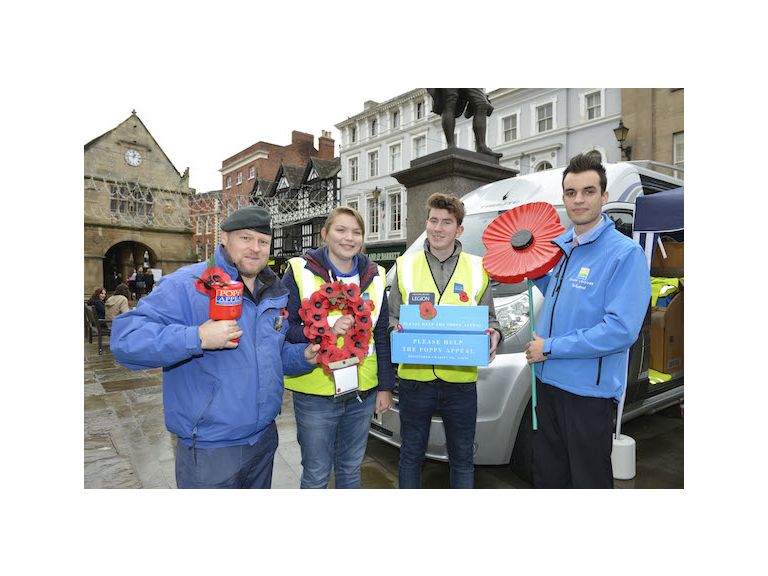 Award-winning caravan dealership Salop Leisure supported the Royal British Legion Poppy Appeal in Shrewsbury by loaning a motorhome for the use of collectors in The Square.

Groups of students from Walford and North Shropshire College helped staff the van and collection base in The Square, collect money in the town centre and pack shoppers’ bags in the town’s Sainsbury’s store.

Peter Whalley, Poppy Appeal community fundraiser in Shropshire, said today (Wednesday) that the appeal in Shrewsbury district had so far raised £35,000. In the town’s Tesco store alone, £8,000 was collected for the appeal over two weeks and £4,484.59 was collected in The Square over six days.

”With many more tins still to be counted, I am optimistic that we can beat last year’s total,” he added. “I was very grateful for the loan of the motorhome by Salop Leisure from November 4-9, which was used as a base for our collectors in The Square.

“I must also thank the students from Walford and North Shropshire College and their lecturer Paul Shepherd for their support during the week.

“The Poppy Appeal does seem to have had more media exposure at a local level this year and we are very grateful for the public’s support and generosity. I would like to stress that it’s a 12 month appeal and we appreciate all the support we receive from members of the public and the business community.

“Every poppy goes towards the £1.6 million we need each week to provide direct support to British Armed forces and their families for the remainder of their lives.”

Salop Leisure’s chairman Tony Bywater said the company was pleased to have been able to support this year’s Poppy Appeal in Shrewsbury by loaning the motorhome.

“I think it’s very important that we remember Armed Forces personnel who lost their lives whilst serving our country and those that continue to serve in conflicts around the world,” he added. “We owe them a huge debt of gratitude.”