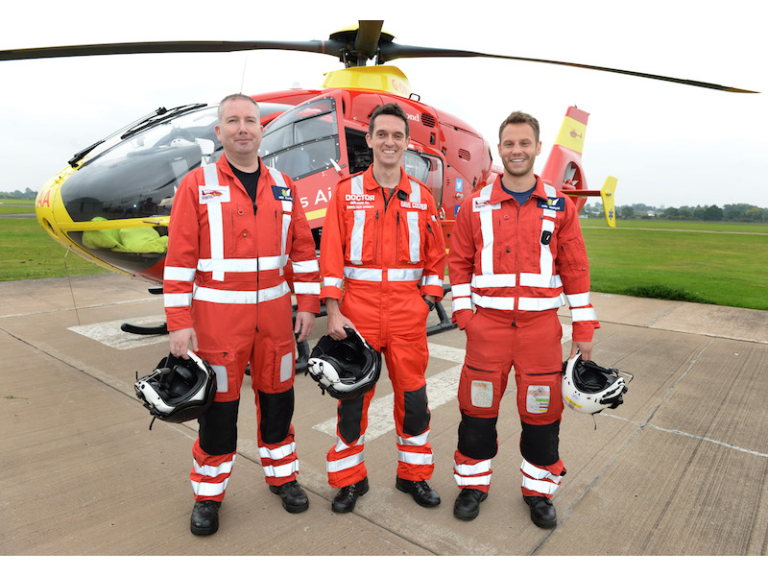 Hosted by TV favourite Carol Vorderman, the Daily Mirror's Pride of Britain Awards will be aired to over 11 million viewers on Thursday 1st October. The awards celebrate the achievements of truly remarkable people, and the trio, who work out of the charity’s RAF Cosford airbase in Shropshire, were chosen for their life saving work while tending to the victims of the horrific Smiler rollercoaster crash at Alton Towers.

Becky Tinsley, air operations manager for Midlands Air Ambulance, highlights why the three clinicians were nominated: “Every day our flight paramedics and doctors tend to people in their greatest hour of need, and on this occasion the crew went above and beyond the call of duty, putting themselves at risk to save others. Ben, David and Tom rescued those most critically injured on the Smiler rollercoaster. On the day their teamwork, clinical expertise, bravery, ability to work in extremely complex conditions, and care for the patients was exceptional. Without their input, it is almost certain two of the patients would have had far worse outcomes, and they are very worthy winners of a Pride of Britain Award.”

Unsung heroes Ben (who was in the capacity of a volunteer doctor with the North Staffordshire BASICS team on the day of the accident), David and Tom represented the Midlands Air Ambulance Charity, which receives no Government or National Lottery funding to operate its vitally important service, at the star-studded ceremony on Monday 28th September.

Hanna Sebright, chief executive for Midlands Air Ambulance Charity, comments: “While the Alton Towers accident was extremely complex, it is indicative of the types of air ambulance missions the aircrew attend. We are all extremely proud of Ben, David and Tom who have all shown tremendous dedication and commitment to saving lives. It is very fitting their actions have been recognised in this way and they are truly remarkable members of our team.”

Dr Ben Clark says: “We are overwhelmed by the level of support and praise we have received from our colleagues, employers and the public. I am proud to work with both North Staffordshire BASICS doctors and the Midlands Air Ambulance Charity, and feel truly honoured to be part of an award winning team.”

Dr David Cooper adds: “It’s been a very surreal few weeks knowing that we will be presented with a Pride of Britain Award. While others may feel our efforts were extraordinary, we feel like we were just doing our jobs. It is an incredible feeling to know our efforts saved two people’s lives that day, and we have enjoyed meeting with Leah and some of the other patients since the accident.”

Tom Waters also adds: “It is very humbling to have been nominated, let alone win a Pride of Britain Award. We worked as part of a wider team of over 40 emergency service professionals at Alton Towers, demonstrating the great level of teamwork on the day. We couldn’t have done what we did without everyone’s support and we’d like to accept the award on behalf of all those who attended.”

Support your local Pride of Britain winners by texting MAAC15 £3 to 70070. Look out for the Pride of Britain billboards on the M5, M6 and Aston Expressway, kindly sponsored by corporate partners, M6 Toll.

For more information about the Midlands Air Ambulance Charity, and how to support this vitally important emergency service, please visit www.midlandsairambulance.com or call the team on 0800 8 40 20 40.

The incident took place on the Smiler rollercoaster at Alton Towers Resort took place on 2nd June 2015. When a moving carriage crashed into a stationary carriage, it left 16 people injured, four with potentially life threatening injuries.

While the Midlands Air Ambulance aircrews regularly receive on going extensive training for serious and major incidents, the extent and seriousness of the injuries, coupled with the complexity of reaching the injured 30ft in the air, at a 45 degree angle, meant they had to work together at great speed to ensure the very best possible outcomes for those involved.

As part of the theme park’s own internal rescue plan, a platform to reach the carriages was built. All the clinicians worked together in restrictive conditions, while attached to safety ropes to assess and administer treatment, primarily to the four most severely injured patients situated at the front of the carriage.

Upon immediate assessment of all the injured, it was clear Leah Washington was in grave danger, as she was bleeding profusely, so the priority was to stop the blood loss. She was given drugs to promote clotting and two combat tourniquets were applied to her left leg. At one point, Dr Ben Clark had to remove his safety helmet to crawl into the structure to reach Leah’s legs to cut away the metal structure and release her legs. One of Midlands Air Ambulance’s helicopters was sent to retrieve two units of blood and two units of frozen blood plasma from the Royal Stoke University Hospital.

Despite the extreme surroundings, trauma doctors, Dr David Cooper, Dr Ben Clark and critical care paramedic Tom Waters remained on the Smiler for over four hours, demonstrating their incredible dedication and bravery, going above and beyond the call of duty.

Leah Washington and Vicky Balch both received life changing injuries, requiring partial leg amputations. They are both here today, thanks to the collaboration of the emergency services and the clinical expertise and swift intervention demonstrated by the medical teams from Midlands Air Ambulance involved on the scene and in the air.