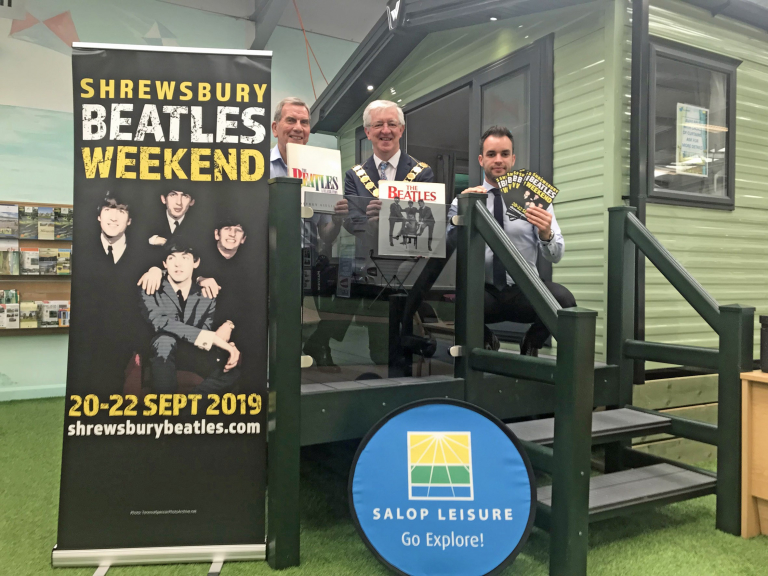 The ‘Long and Winding Road’ will lead to Shrewsbury in September when the town’s mayor Councillor Phil Gillam organises a charity Beatles Weekend.

Cllr Gillam has chosen Shrewsbury Samaritans as the mayor’s charity during his term of office. Rather than organise a traditional mayor’s ball as a fundraiser, he decided to indulge his passion for the Fab Four by holding Shrewsbury Beatles Weekend from September 20-22.

Shrewsbury’s caravan, motorhome and campervan dealership Salop Leisure has agreed to support the mayor by being main sponsor of the weekend.

Beatles tribute bands will provide live music and a series of films and documentaries – Backbeat, Looking for Lennon, Good Ol’ Freda, A Hard Day’s Night and The Beatles: Eight Days a Week, The Touring Years – will be shown at The Walker Theatre at Theatre Severn over the weekend.

The Beatles in Comics will be the theme of a talk by former Marvel comic book creator Tim Quinn at The Hive, Belmont Street at 2.30pm on Sunday, September 22.

A free Beatles Open Mic Evening at The Wheatsheaf, Frankwell will be held from 7pm on Saturday, September 21 and The Backbeat Three, Famous Last Words and Two-faced Tom and The Bootleg Boys will appear in a ‘Lunchtime at The Cavern’ at The Buttermarket Cellars from noon to 2pm on the Sunday.

The weekend ends with a concert by The Mersey Beatles at Theatre Severn at 7.30pm on Sunday, September 22.

Salop Leisure is also planning Beatles inspired events at the company’s Love2Stay resort in Shrewsbury over the weekend.

A Beatles Evening, which will be open to local residents as well as Love2Stay guests, will be held on Friday, September 20 with a Beatles themed band, 1960s themed food and drinks and fancy dress.

Saturday will see a Beatles themed film being shown in Love2Stay’s cinedrome and there will be a charity raffle held over the weekend.

Tickets for both events will be available from Salop Leisure and Love2Stay on Tel: 01743 583124 and can also be purchased online at https://www.love2stay.co.uk/ . £1 from each ticket sale will be donated to the mayor’s charity.

“When I became mayor, I wanted to do something a bit different rather than organising a big ball, which wasn’t me,” explained Cllr Gillam. “I am a Beatles aficionado and I was talking to Tim King who is also a huge Beatles fan.

“We came up with lots of ideas and when we got The Mersey Beatles on board, lots of other people began to get interested.”

They have ended up with a full programme of events, which begin with a Summer Beatles Cruise on the Sabrina river boat at 7pm on Thursday, September 19.

Tony Bywater, Salop Leisure’s chairman, said the company was delighted to sponsor the mayor’s Shrewsbury Beatles Weekend, which he hoped would attract many visitors to the town and raise a significant sum to support the work of the local Samaritans.

For more information about the weekend visit shrewsburybeatles.com on Facebook.

Orangeries In Time For Summer?