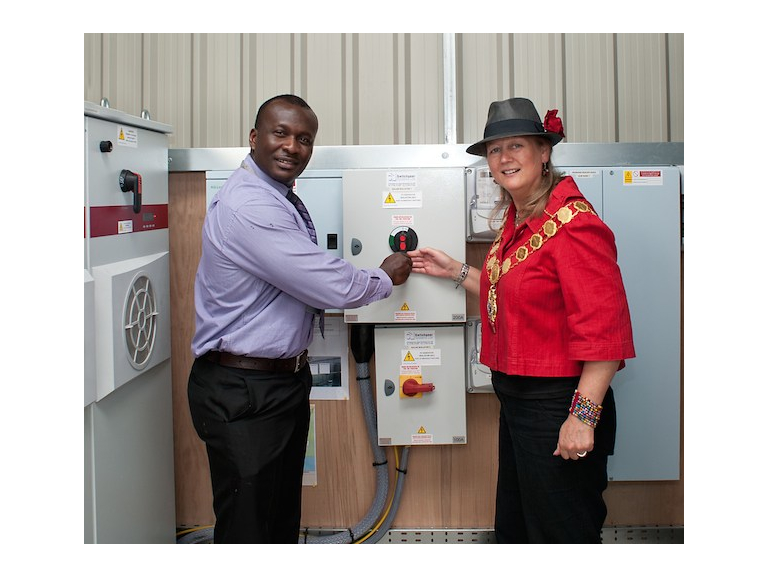 A leading Shropshire sports club has demonstrated its commitment to becoming more enviromentally friendly with a large-scale switch to renewable energy.

The owners of The Shrewsbury Club, a family friendly health club and indoor tennis centre on Sundorne Road, have invested around £350,000 in a renewably-fuelled energy centre which will reduce its reliance on fossil fuels while also lowering its annual energy expenditure.
The club invited the Mayor of Shrewsbury, Councillor Beverley Baker, to flick the switch which transferred the energy supply to the renewable sources from the traditional gas and electric supply.
Councillor Baker said: "It's stunning and the whole set up is a really good way of moving forward. This is going to help the environment, it's going to help the building and will also keep the costs down which means more people will enjoy coming here. I'm very impressed with the process. It's so simple but so effective."
The new system, designed and built by Shropshire-based renewable energy specialist Edge Renewables Ltd, has seen the construction of a purpose-made energy centre.
It houses two biomass boilers that produce all of the site’s heating and hot water requirements from the specialist company’s locally-produced wood chip fuel.
The new biomass-fuelled system also includes two 5,000-litre insulated heat storage tanks that will help the system’s efficiency when supplying large demands for heating and hot water during the coldest months of the year.
Some 960 square metres of solar photo voltaic panels have also been installed onto the club’s roof which will generate some 120,000 kWh of electricity every year.
Steve Taylor, a director with Mosaic Group, owners of The Shrewsbury Club, said: "With the club’s move towards renewable energy from traditional fossil-fuel-supplied alternatives, we expect to annually save the emission of around 215,000kg of carbon, which is the equivalent to taking around 90 average family cars off the road.
"There's a strong economic case for shifting to renewable energy. With the savings that we’ll be making on our energy bills, the return on investment should be impressive.
“We chose Edge Renewables due to their professional and comprehensive approach. They are a local partner for us whose expertise and service is as impressive as anything available in the UK.”
Simon Lloyd-Jones, managing director with Edge Renewables Ltd, added: “Having a large swimming pool, health spa, gym and tennis courts, the club has a steady demand for heat, which lends itself to biomass boilers.
"Couple this with the Solar PV panels on the roof and the carbon savings really start to mount up.
“The boilers will annually recover the energy from around 300 tonnes of woodchip fuel – which is produced by us in the former Lea Quarry site at Wenlock Edge, so the whole process is very much in the spirit of local sustainability.”