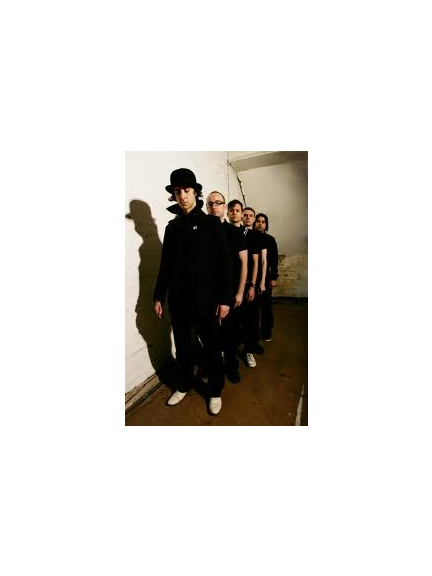 Musical maestro’s with a huge helping of northern charm – Mercury Prize nominees Maximo Park are to headline Shrewsbury Fields Forever Festival 2013 – in one of just a handful of gigs the band will play this year.

As well as the massive coup, festival organisers are delighted to announce support from The 1975 and supreme dance act K Klass, who will also perform at the three-day festival which takes place at the West mid / Shropshire Showground from September13-15. Currently in its third year the event is expected attract considerably more than the 7000 people who attended last year.

The event has already seen impressive pre-ticket sales, selling up to 10 times faster than last year and new additions such as a second dance tent, extended musical programme on the Sunday and more community based activities mean the event is the biggest yet, while prices remain incredibly good value.

Maximo Park, a quintet from Tyne & Wear are a British alternative rock band, formed in 2000. They have released four studio albums: their 2005 debut album A Certain Trigger, was nominated for the Mercury Prize. The 2007 follow-up was Our Earthly Pleasures followed by Quicken the Heart, and their most recent album, The National Health, was released last summer. The first two albums were majorly successful with the second going double platinum.

Maximo Park has a huge string of hits to their name including ‘Our Velocity’, ‘Apply some pressure’, ‘I want you to stay’ and ‘Girls who play guitars’ and have sold out gigs in record time.

Of their latest album, lead singer and songwriter, Paul Smith has said: “It was time to reinstate what we do and who we are. The new album feels like the greatest hits collection we never had.”

The new album also brought a further tilt towards electronics, and songs that address the current state of the nation and find out – as anyone living in Britain at the moment would no doubt concur – that not everything is well.

Mr Smith added: “We’re in a global recession and everyone is being bombarded with bouncy, happy music.

“The nation is out of control and the record is about taking back control, and being a force for change in your own life. It can’t speak for everybody but it has its eyes and ears all around us. That’s always been a Maximo Park thing: look at yourself.”

Joining Maximo Park who will bring the Saturday night to a close, is The 1975, who festival director Dene Edwards, has described as ‘a band about to be massive’.

The 1975 are all over the radio right now with their hit single ‘Chocolate’, with their follow up single ‘The City’ due for release on May 20th.

Described by Radio One’s Huw Stephens as “a Manchester band with a beautiful, sensitive swagger” the band has already sold out tours both in the UK and the US and a supported fellow Brits Two Door Cinema Club, in a tour across Europe. The band’s May UK tour is sold out as are two landmark shows at London’s Shepherds Bush Empire and Manchester’s The Ritz in Sept 2013.

Added to the bands playing on the Sunday of the festival in the new ‘Old Skool Dance Tent’, are K Klass – who are responsible for some of the most iconic house tracks ever made. They play worldwide on a weekly basis. They have played the legendary Hacienda “Nude” nights before becoming residents for the world’s biggest dance brand “Cream”, playing guest slots all over the world. Hits across the last two decades include “Rhythm is a Mystery” which reached No.3 in UK Top 40, and the huge “Let Me Show You”. K-Klass won the International Dance Awards in 1995 & were nominated for the USA Grammy Award.

Mr Edwards said: “We are delighted to announce Maximo Park as the first of our headliners this year. Not only are we back for a third year, but as ever, the festival is bigger and better than ever with a barrage of new additions including more camping, more acts, more stages and more attractions, but still at an amazingly good price.”

“Maximo Park are current, soulful, and quite frankly absolutely amazing live – one of the best live bands you will see in the UK today and they really give it their all. It’s going to be an amazing set. Added to which The 1975 look set to become one of the breakthrough artists of the year and their songs are ridiculously catchy. You can’t turn on the radio without hearing them and I can’t wait for the people of Shrewsbury to catch this band here in our town.”

“One of the additions customers have mostly requested is more oldskool dance, and K Klass are amongst oldskool royalty, they have stayed evergreen and I am really looking forward to their special live performance”

“We are thrilled to be bringing such a diverse, interesting and high caliber list of acts to the town and we are looking forward to seeing as many people as possible supporting the event in the town with us. More announcements will follow shortly, check the website for all the latest.”