Macmillan Cancer Support fundraiser Max Ball has received help from his friends to smash through the £9,000 mark as he heads along the final straight with just three challenges left to complete.

When his dad, Steve, was diagnosed with oesophagus cancer last October, Max, 25, decided to take on 12 different sponsored challenges - MaxAndTheMac12 - during 2016 to raise money to thank the charity for supporting his family. 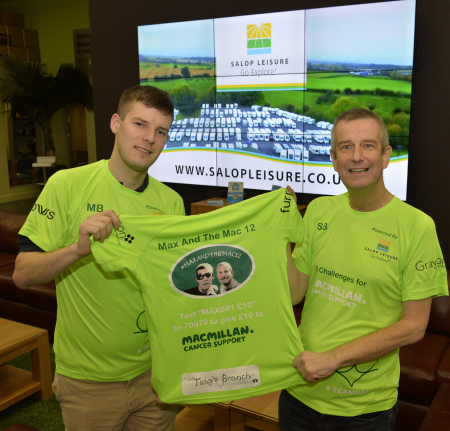 Having conquered the National Three Peaks Challenge in July - to name just one - his most recent challenges have been the Dana Prisoner Escape from the former Shrewsbury Prison, a foot golf tournament in Madeley and white water rafting in Llangollen.

He has been joined on many of the challenges by workmates from Shrewsbury-based caravan, motorhome and campervan dealership Salop Leisure, family members and friends.

Next up is a 24-hour squashathon at Kingsland Squash Club, Shrewsbury from 6.30pm on Thursday, September 1. The event will be divided into four hour sessions broken by a 30-minute break for players to refuel, shower and re-energise.

Around 43 players will be taking part, including Steve, who hopes to play for five minutes at the start and end of the squashathon.

Praying he still has some energy left in his body, Max then heads into the Shrewsbury Sprint Triathlon on September 4, which involves a 500 metre swim in the River Severn, a 23 kilometre cycle ride and a five kilometre run.

Finally, he will be joined by workmates Mark Fras, Carl Williams and Carl Miller and Shrewsbury Mayor’s chauffeur Robert Handley for a 106 kilometre tors cycle ride organised by Ludlow Cycling Festival in aid of Macmillan Cancer Support on September 18.

Anyone wishing to enter the cycle ride should register at http://www.ludlowcyclingfestival.co.uk/contact/

“I have had phenomenal support from my work colleagues, family, friends and sponsors, which has helped me pass my original fundraising target of £8,000,” he added. “Words cannot adequately express my thanks for their support, kindness and generosity.

“The money raised will help Macmillan to reach more people and improve the quality of care and support available to them during their cancer journey.”