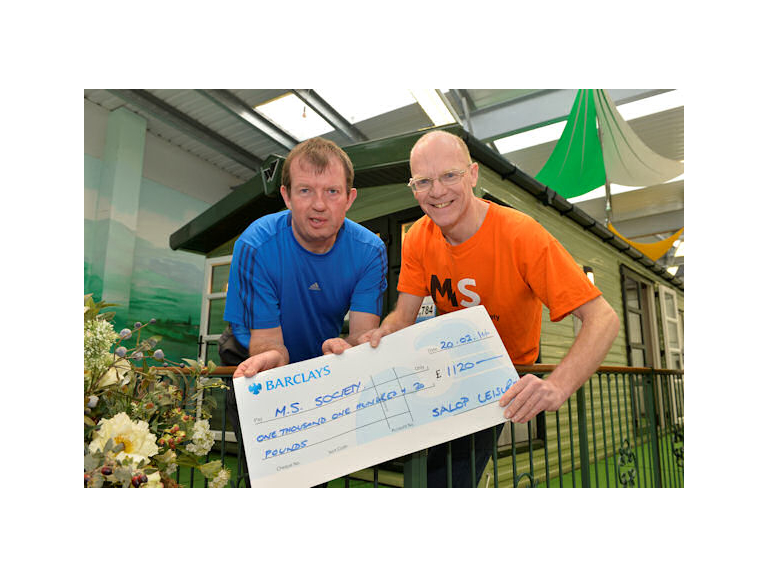 A fitness drive by the joint managing director of a Shropshire and Mid Wales company has produced a £1,120 dividend for the Multiple Sclerosis Society.

Dylan Roberts from Salop Leisure, which has sales centres in Shrewsbury, Machynlleth and Stourport-on-Severn, raised the money for the charity in memory of his late father, Dr Ieuan Roberts, by completing the Lake Vyrnwy Half Marathon last September.

Dr Roberts died from MS in 1983 at the age 43. He was a founder lecturer at the Welsh Agricultural College, Aberystwyth.

“As I was approaching the age 50, I decided that I should do something to improve my fitness and took up running in November 2012,” said Dylan, who lives in Bow Street, Aberystwyth.

"I decided that I would have a go at running the Lake Vyrnwy Half Marathon and raise money for the MS Society, which is a charity close to my heart," he explained. "I receive a regular newsletter from the charity which charts the progress being made with research in recent years.

“They are pushing for money to complete the research, which will hopefully lead to an amazing breakthrough. What better cause to support.”

He was joined on last year's Lake Vyrnwy run by his wife, Glesni and four work colleagues from Salop Leisure and was delighted to break the two hour barrier by two minutes. Since he started his fitness drive, several work colleague have also taken up running for the first time.

Andy Jarrett, west area fundraiser for the MS Society, who received a cheque from Mr Roberts, said: “I would like to thank Dylan for his marvellous support by completing the half marathon in memory of his late father.

“It’s a real achievement and to have raised so much money for vital MS research is amazing.”