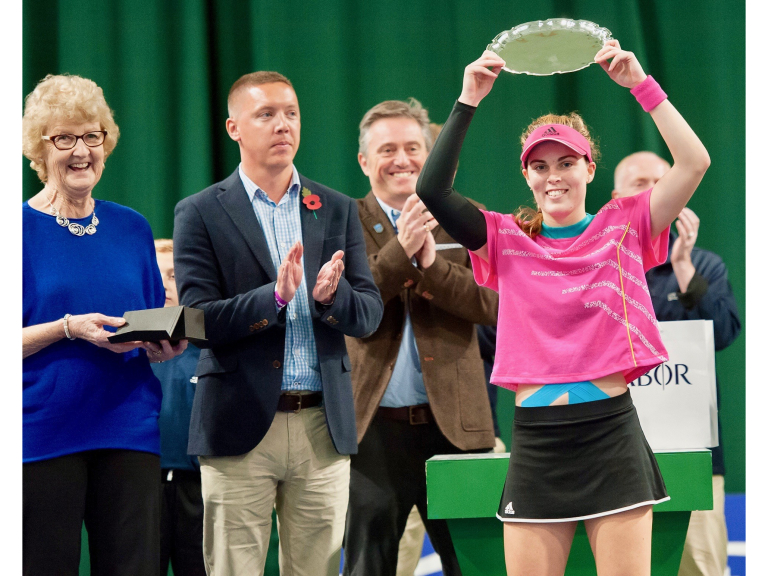 Lumsden, who celebrated her 21st birthday last month, has fond memories of her last visit to The Shrewsbury Club in November when she emerged from the qualifying rounds to win the first $25,000 title of her career.

That impressive triumph helped the Scot climb to a career high of just outside the top 300 in the world rankings as she targets more success on the Sundorne Road venue's indoor courts.

British No. 9 Lumsden knows the competition will be much tougher in next week's prestigious $60,000 International Tennis Federation event, which will include evening matches alongside a busy daytime schedule.

Three of the five members of the Great Britain team competing in the Fed Cup this week - Katie Boulter, Heather Watson and Katie Swan - are all set to take part in Shrewsbury.

A strong entry list also includes German star Sabine Lisicki, beaten in the 2013 singles final at Wimbledon, and Belgian ace Yanina Wickmayer, a former US Open semi-finalist once ranked as high as 12 in the world.

Lumsden said: "I'm really excited about coming back to Shrewsbury as I had such a great time in November. Everyone involved with the tournament and The Shrewsbury Club made me so welcome and the size of the crowds and the support the spectators gave me was fantastic. That was so important as playing in front of bigger crowds brings out the best in my game

"It's a more high-profile tournament this time and the entry list looks very strong with many of the leading British players taking part along with a lot of players who have been in and around the world's top 100 for a long time.

"That means the challenge will be even tougher, but it's one I'm definitely looking forward to and I hope lots of people will come along, enjoy the tennis and cheer me on again. I came through qualifying last time and went all the way in the main draw, so I will give it everything to do something similar this time."

Entry is free for spectators on the first three days of the tournament, with tickets available to be purchased from the quarter-finals onwards, next Thursday, to enjoy the action from stadium seating.

Dave Courteen, managing director at The Shrewsbury Club, said: "We are proud to have been selected to host what is, outside of the Fed Cup and the grass court season, the biggest women's tennis event in the UK this year.

"The VIP lunch ahead of the two finals being played is already sold out, but tickets are still available for spectators to come along and watch both the singles and doubles finals.

"A limited number of tickets also remain available for the other hospitality events which will be held in a heated marquee before guests move into the club to enjoy the tennis.

“There’s a family-orientated evening next Monday, from 6-9pm which will feature live music, food, a chance to meet the British players for autographs and photos, interactive tennis games and activities, with the main draw also to be conducted for the tournament.

"A special love tennis evening will be held on Valentine’s Day, Thursday, February 14, from 6-10pm, which will include a welcome drink, food, live music and stadium seats for the pick of the evening quarter-final ties.

To purchase tickets, visit www.theshrewsburyclub.co.uk or www.shropshirefestivals.co.uk and click on the world tour tennis button.