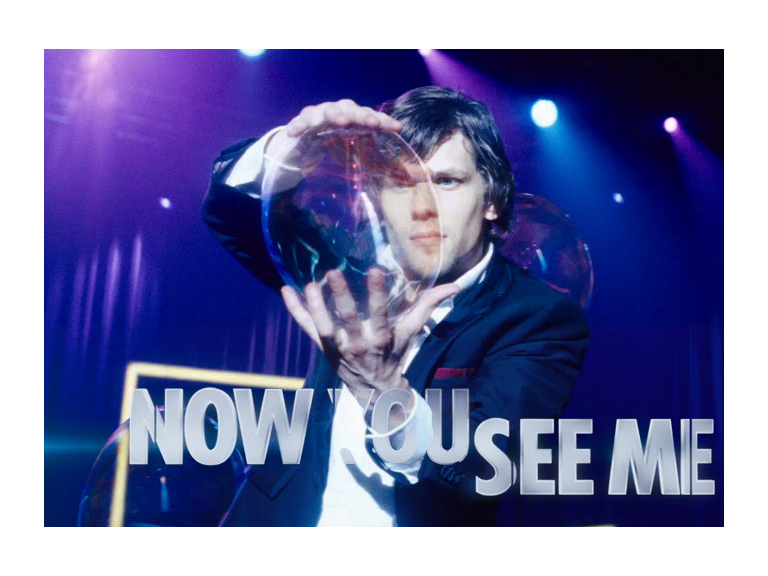 Showing at Shrewsbury Cineworld Cinema, Now You See Me is the latest offering by Director Louis Letterier but it's not quite as magical as the trailer promises.

The trailer to this film made me and my partner very excited to see it. It seemed to offer something different to the general action-packed bank heist from Hollywood.

It offers a modern twist, some spectacles and suped-up special effects and a great cast (apart from Isla Fisher who I am sure I could do a better job than in anything).

But this film is a wee bit, dare I say it for something that is by it's very nature, a spectacle, a wee bit boring in places.

The story goes that Jesse Eisenberg , Isla Fisher, Woody Harrelson and Dave Franco (who has exactly the same voice as his actor brother Franco), play four funky magicians who are recruited by a mysterious individual to form an Avengers-style unit of conjuror-superheroes who are going to use their illusionist skills to pull off the most dazzling bank raid of all time. They also have a touch of the Robin Hood's about them.

The opening scenes are entertaining and set the film off to an enthralling and promising start. And crucially, this is the section of the movie not about bank-robbing, but after this, it begins to get a bit tangled and in places confusing.

The quartet's mastery of the ordinary non-magic skills necessary in large-scale theft is not entirely unconvincing and the explanations to how they did it offered later by confusing mystery man played by Morgan Freeman (you can never quite figure out what his role is) formed some of my favourite parts. You always want to find out how they did it don't you.

Magic is in theory, a very interesting subject for a movie: magic and cinema share their origins in the fairground tents of old.

But the magicians themselves have to be interesting characters, quite aside from their supposed skills. And in my book only Harrelson, who is near perfect in everything and relative newcomer Franco junior pulled this off.

Fisher is squeaky, dull and displays as much skill and conviction as an actress as a dead fish (which she nearly becomes and i hate to diss a fellow redhead) and Eisenberg can only play one character as far as I can tell and I got quite enough of his autistic style portrayal of Facebook founder Mark Zuckerberg in The Social Network.

The end scenes however do redeem the film and there is after all of the capers, a shock revelation at the end. But even that falls a tad flat after not enough explanation is weaved through the film to sew up all the reasons behind the outcome.

This is an entertaining spectacle but it lacks substance and unfortunately I didn't think it was worth falling off my bike for on the way there. Although that probably put me a bad mood. The ice cream helped though!

NOW YOU SEE ME FACT FILE:

Countries: Rest of the world, USA