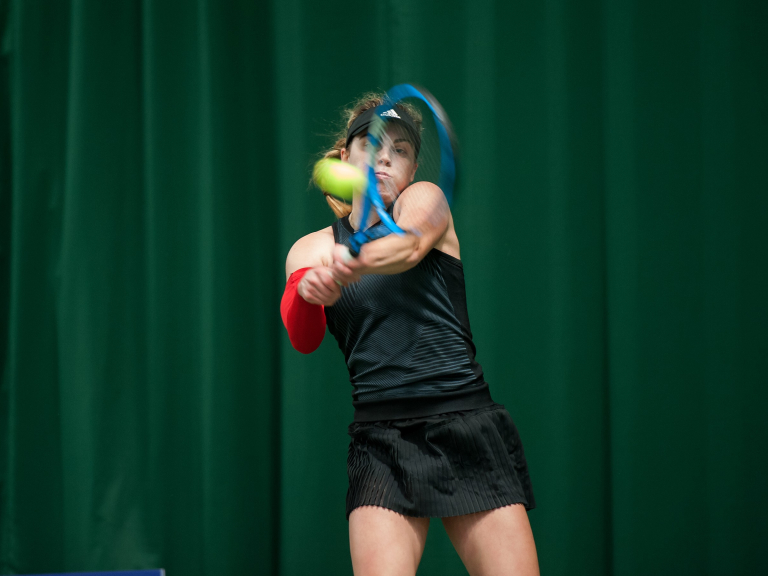 Lumsden, 21, winner of a $25,000 event at The Shrewsbury Club in November, is relishing being back in familiar surroundings which clearly bring out the best in her.

The Scot beat Italian Anastasia Grymalska, a player ranked more than 100 places higher, 7-5, 4-6, 6-1 to claim a notable first round victory.

Burrage, 19, having progressed from the qualifying rounds, then impressed to join Lumsden in the last 16 of the prestigious $60,000 tournament.

Next up for Burrage, who has a current ranking of 369, is third seed Tereza Smitkova from the Czech Republic today.

Lumsden produced a determined display, winning the last six games in a row to take the decisive final set, just after requiring treatment from the physio for a calf injury towards the end of the second set.

“I’m really happy to win, to come through that match,” said Lumsden, currently ranked 344 in the world. "After the second set, I wasn’t sure as I hurt my calf a little bit. In the third set, I just tried to be more attacking and keep the points shorter.

“I think the fact that I was having to attack more actually helped because that’s what I was doing well when I won the first set. It made me be more attacking. I’m happy I did that. I was just trying to enjoy it out there as well because it was such a good crowd again watching. It’s great to be back at the club again.”

Robson, drawn as a lucky loser from the players beaten in the second qualifying round on Monday, was on court for two and a half hours, her third match in two days, after making Shrewsbury her comeback tournament, her first event since hip surgery in July.

The three other British players in the main draw were also knocked out. Naomi Broady lost 6-4, 6-3 to Raluca Georgiana Serban from Cyprus, who will now meet fifth seed Aliona Bolsova Zadoinov in round two after the Spanish player overcame Francesca Jones 6-3, 6-0.

Freya Christie, a finalist at The Shrewsbury Club in 2015, was beaten 6-4, 6-2 by French player Myrtille Georges, a lucky loser from the qualifying rounds who benefited from the withdrawal of Sabine Lisicki.

The tournament’s top two seeds signalled their intent by losing just four games between them in easing through to the second round.

Belgian Yanina Wickmayer, currently ranked 126 in the world having been as high as 12, beat Dutch opponent Lesley Kerkhove 6-2, 6-1.

Second seed Vitalia Diatchenko, from Russia, ranked just one place below Wickmayer, produced a strong performance to get the better of Italian Martina Di Giuseppe 6-1, 6-0.

Today’s second round matches start at 10am, with admission free for spectators to enjoy the action from courtside seating.

Tickets are available to be purchased from Thursday’s quarter-finals onwards, with day tickets priced £12 (£6 for club members) while a tournament pass for the rest of the week, which concludes with the singles and doubles final on Saturday afternoon, costs £25 (£15 for club members).

To purchase tickets and for more details of the evening hospitality events, visit www.theshrewsburyclub.co.uk or www.shropshirefestivals.co.uk and click on the world tour tennis button.