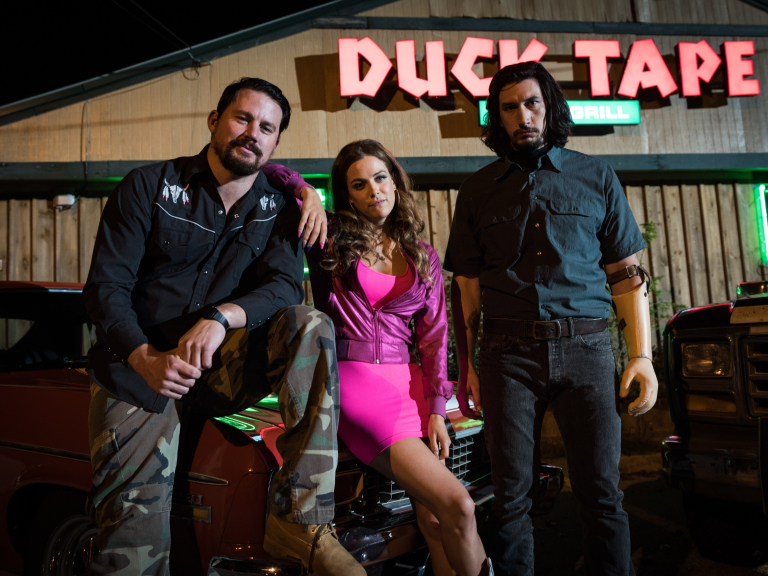 Back in 2013, Ocean’s Eleven and Magic Mike director Steven Soderbergh announced a break from film-making. Now he’s back with light-hearted crime caper Logan Lucky. We recently saw it at Cineworld Shrewsbury, and were pleasantly surprised at what a warm, family-friendly adventure it turned out to be.

As the film opens, the Logan family doesn’t seem too lucky at all.  Jimmy Logan (Channing Tatum), a blue-collar construction worker, is laid off from his job fixing sinkholes underneath the Charlotte Motor Speedway. A divorced yet devoted dad to an adorable daughter, he learns that her mother is moving the family away, which will make it harder for him to visit.

He decides the answer is to rob the Speedway, recruiting his one-handed brother Clyde (Adam Driver), his sister Mellie (Riley Keough), and a convicted safecracker (Daniel Craig). Good-natured high-jinks and plot-twists ensue.

Think of Logan Lucky as the country-western version of Ocean’s Eleven (the phrase Ocean’s Seven-Eleven is wittily used in the film). Set in West Virginia, the film includes a saloon bar, a child beauty pageant, the music of John Denver and many drawling Southern accents – some a bit dodgy. None come dodgier than Daniel Craig’s, but as bleached, buzz cut Joe Bang this is surely his funniest ever performance.

Jimmy and Clyde need Joe’s expertise to help them access the pneumatic tubes that transport cash underneath the Speedway. Unfortunately he is currently in state prison. Which means breaking him out, carrying off the heist and sneaking him back in before anyone notices.

Jimmy’s ‘Rules For Robbing A Bank’

If you’re a fan of heist movies you’ll enjoy Logan Lucky. Though it asks not to be taken too seriously (at one point Clyde’s fake hand gets sucked into a giant vacuum), the main heist portion of the film proves Soderbergh still has the knack for tense, nail-biting filmmaking. As the gang fill bin bags with thousands of dollars and attempt to sneak them out as garbage, we get glimpses of the Speedway’s security team coming dangerously close to discovering them.

Things just keep going wrong, and Jimmy and his brother seem to be flying by the seat of their pants – but was there really a greater plan the whole time?

Thief with a heart of gold

The message of Logan Lucky is not to judge a book by its cover. The Logan brothers and, in fact, most of the characters, seem gruff, mad or dim-witted, but the truth is they are criminal masterminds with hearts of gold.

Clyde is convinced the Logan family is cursed, but rest assured the title of the film wins out in the end. Bearing in mind its 12A rating, Logan Lucky is a playful romp both parents and children can enjoy.

Afterwards, as we were walking out of Cineworld Shrewsbury, we were left trying to get our heads around the final twist… just how did they manage to get away with it?