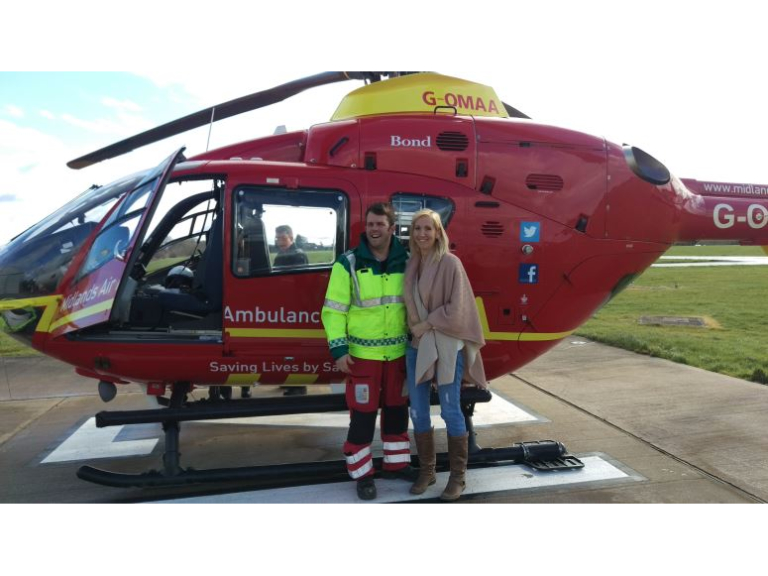 A mother of four children between the ages of two and 13, 40-year-old office worker Amy decided to fundraise for the charity after learning that it receives no Government or National Lottery funding.

Amy explains: “I couldn’t believe that such a vital service receives no funding. Without Midlands Air Ambulance Charity many lives would be lost and having my children and not knowing what can happen in life, I wanted to do my bit to help.”

Amy said: “I originally planned to fundraise for the charity by doing the London Marathon, but when I found out it was their 25th anniversary year, the crazy in me decided to up the game and go the full hog by signing up to 25 challenges! Every free minute that I'm not running around after the children or working, I'm training!

“I have a fear of heights and speed, I don't really like being in water if my feet don't touch the floor, and I hate getting cold, dirty and wet! I'm far from being an adrenaline junkie, so these challenges really will make me face my fears!”

Amy from Ruyton XI Towns has already undertaken the Attingham Park Night Run, the Ironbridge Half Marathon, the Shrewsbury 10k  and the Lilleshall 10k. She will take part in the London Marathon on the 24th April, and then take on 20 more challenges from May, culminating in the White Run in Condover in December.

Amy continues: “I am funding all of the challenges myself so every single penny donated goes straight to Midlands Air Ambulance Charity, any donation no matter how big or small is so gratefully received. I’ll be getting my kids involved for moral support and I’m hoping that it will inspire them to be charitable in the future.”

Going above and beyond

As well as undertaking the 25 challenges, busy working mum Amy is also organising a Quiz & Bingo night on the charity’s official Birthday, May 21st, at the Inn on the Green Radbrook, Shrewsbury, which will feature a raffle and auction for the charity with some fantastic prizes including; signed Shrewsbury Town, Southampton and West Bromwich Albion Football Club merchandise, Port Vale match tickets, Safari Park visitor passes, a Tanners wine basket and a fast car experience. Ultimate Fitness Experience who are helping Amy with her training, have donated an auction prize worth £100 and are also donating the car park proceeds from a mud run believed to be worth £200.

Maria Jones, fundraising manager for Midlands Air Ambulance Charity adds: “Each Midlands Air Ambulance Charity mission costs on average £2,500, so the money Amy will raise through completing the 25 challenges will help to fund a future lifesaving mission. Amy is really going above and beyond with her fundraising, and we’re very grateful for her efforts.”

If you would like to know more about Amy Jones and the 25 in 25 challenge, please visit her Facebook page here and sponsor Amy via her JustGiving page here.