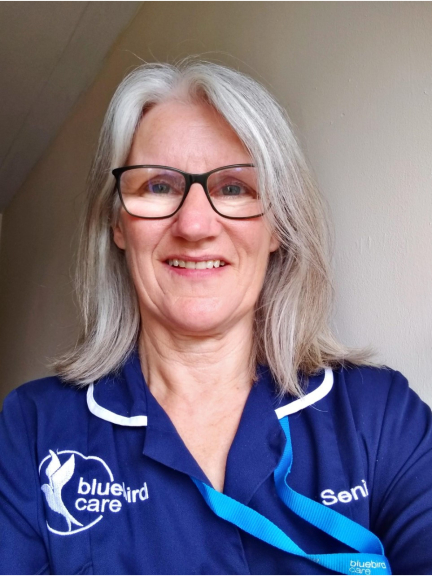 Local care assistant, Pamela Howell, (affectionately called “Pam”) of Bluebird Care Shropshire, based in Shrewsbury, Oswestry and Church Stretton, has scooped up an award for her valiant work with a Bluebird Care customer.

During the online awards ceremony, live streamed from the Shropshire Chamber’s website, Pam won the “unsung hero” award. She was nominated by a colleague due to the work she has done with a particular customer. When the customer came to Bluebird care they had been homeless and just been moved into temporary accommodation, but Pam helped get them a permanent place to live, furnish their home, and also helped them to reconnect with their mother, who was estranged, before she sadly passed away.

Daryl, a colleague of Pam’s at Bluebird Care, who nominated her, had this to say:

"I am so glad that Pam won, it's definitely well-deserved and it is lovely that her hard work has been recognised."

The night was a great one for Bluebird Care, as they had two finalists in the awards - Sharon Parsonage, who was nominated as a “valiant volunteer” was nominated because she voluntarily called her regular customers despite having to shield with her disabled husband. She spent a lot of time making notes and ensuring that customer’s mental health was cared for as well as physical and immediately spoke to the office should anything be a problem. She lost to Elaine Colley of Telford college, who had bravely gone back into the work force after 15 years due to the COVID-19 pandemic

Sharon had this to say about her nomination:

“Losing to Elaine was a real honour, and I’m so proud of all of us who were nominated- everyone deserved an award that night!”

“I am really pleased that Pam won her category – she works so hard and she really deserved it.”

Pam had this to say about her finalist status and win:

“At first, I didn’t think I deserved this award, but when it was explained to me that I was instrumental in turning someone’s life around, I agreed.”

“I would like to say that I am a small member of a great team, and my colleagues have really helped me through, so on behalf of them and me, thank you very much.”

The winners will receive their physical awards in a few weeks under socially distanced conditions.

Bluebird Care Shropshire was crowned Best Home Care Team Award at the regional finals of the Great British Care Awards and is going through to the national finals in October in Birmingham.