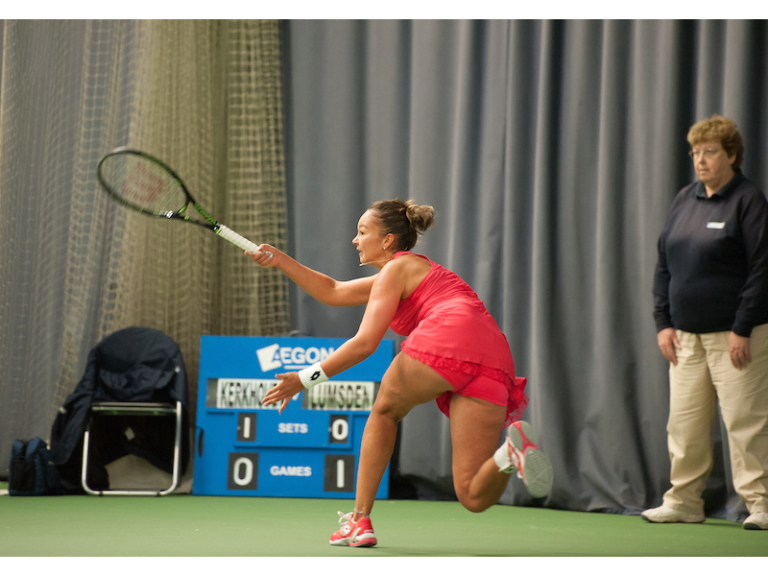 Lesley Kerkhove, a doubles champion at The Shrewsbury Club last year, admits she would love to follow it up with a singles triumph this week after booking her place in round two of the $25,000 Aegon GB Pro-Series tournament.

No 4 seed Kerkhove, 24, now faces British qualifier Manisha Foster in the last 16 today with a place in the quarter-finals up for grabs.

Kerkhove stressed she's determined to do all she can to maintain the winning habit having emerged victorious in a $25,000 tournament in Equeurdreville in France last week.

"I'm happy but it was a tough match and I didn't play so well," said Kerkhove, who was crowned doubles champion at Shrewsbury together with Richel Hogenkamp last year.

"I've just come from France where I won a tournament, so I had two days travelling and the conditions are different here as it's a faster court - the first round after you've won a tournament is always tough."

Kerkhove has fond memories of her doubles success at The Shrewsbury Club and knows she will need to keep playing well to add her name to the club's honours board for the singles event.

Reigning champion Oceane Dodin, the No 1 seed and now ranked just inside the world's top 150, enjoyed a straight-forward start to the defence of her title. The French teenager had few problems sweeping aside Dutch player Quirine Lemoine 6-0, 6-1 in just 53 minutes.

No 2 seed Tereza Martincova, from the Czech Republic, eased past Greece's Despina Papamichail in straight sets, but Croatian Ana Vrljic, seeded three, did not have it all her own way before overcoming Latvian Diana Marcinkevica 6-1, 2-6, 6-2.

British qualifier Foster made it three wins in as many days by beating fellow Brit Jazzamay Drew 6-4, 6-4 to set up tomorrow's clash with Kerkhove, but there was an early exit for British No 7 Tara Moore, beaten in straight sets by Italian Cristiana Ferrando.

Freya Christie, another of the Brits to battle her way through qualifying, is also through to today's second round thanks to an impressive 6-3, 6-2 triumph over Belgian Sofie Oyen.

Admission to the tournament is free all week, with the singles final to be played on Saturday afternoon.