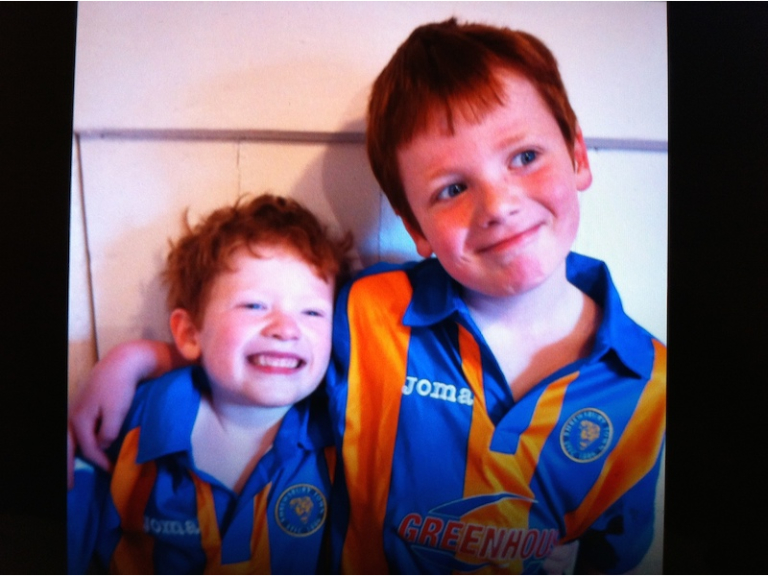 Former football manager Jake King will lead out a team with a difference this weekend - a squad made up of Shrewsbury Town heroes from the past.

Jake, previously the captain and later boss of the club, will make a one-off welcome return to management for a special charity match in aid of The Harry Johnson Trust on Sunday.

Dave Edwards, John McGinlay, Mickey Brown, Dean Spink, Carl Griffiths, Paul Evans, Paul Edwards and Tony Kelly are among the players who will be in action at the Shrewsbury Sports Village in Sundorne, kicking off at 2pm.

Organisers are hoping for a bumper crowd with admission by donation while a glossy 28 page programme has also been produced and is available for a suggested donation of £2 - with all proceeds from the day going to the Trust, set up by Sally and Stephen Johnson in memory of their son, Harry.

Harry, from Vennington, near Shrewsbury, passed away last July, aged just seven, after a brave battle against a rare childhood cancer.

The Worthen Primary School pupil had been diagnosed with Double Hit non-Hodgkins Lymphona and was only the third child known to have this form of cancer.

The Harry Johnson Trust aims to offer help and support to other local children who receive care from the Oncology team at Telford's Princess Royal Hospital.

The Town Legends squad will take on Harry's Heroes, a team captained by Stephen, Harry's dad and a keen Shrewsbury supporter, with the side including many family members and close friends who have all raised generous amounts of money in sponsorship to play.

Jake said he was delighted to be manager of the Town Legends, adding that it was a special day to really look forward to.

"It's a fantastic cause and I hope lots of local people come and support the game," he added. "It will be nice to be back in the dugout. We'll have a few laughs - but I think we'll have to get the stretchers out for one or two of them!"

Andrew Tretton, who will captain the Legends side, said: "It's going to be great seeing a lot of the lads I played with again.

"It will also be lovely to pull on the boots again and see guys like Lee Steele, Pete Wilding, Mickey Brown, Paul Evans and Paul Edwards.

"But the main reason we're doing it is just to raise money for such a worthy cause."

Local lad Dave Edwards, the Wolves and Wales international midfielder, said he was looking forward to pulling on a Shrewsbury shirt once again, particularly as Chris, 32, his elder brother, will be playing for the opposition.

"I don't think we've ever been on opposing sides before," he said. "Chris always played for the county and district when he was younger and he was a good striker, a goalscorer. We're both looking forward to it and it will be nice for the family to come along and see both of us playing."

Sally Johnson, Harry's mum, added she was grateful to all the Shrewsbury Town old boys for agreeing to play on Sunday.

She said that there were so many other people to thank, among them Town supporter Ant Thomas, 31, who successfully bid £586 to secure a once in a lifetime place in the Legends squad among his heroes.

"Part of the reason we wanted to do the Trust was to keep Harry's memory alive and this game will help get across that message and Harry's name out to even more people," Sally said.

"Hopefully there will be a good crowd to enjoy the game. It's a great chance for supporters to watch some of the club's popular former players in action and we are really looking forward to it."

Sally also added a plea for spectators to car share on Sunday as parking at the Sports Village is limited - although there will also be parking available at the Severn Fields Health Village next door and the nearby Coracle pub on Sundorne Road.