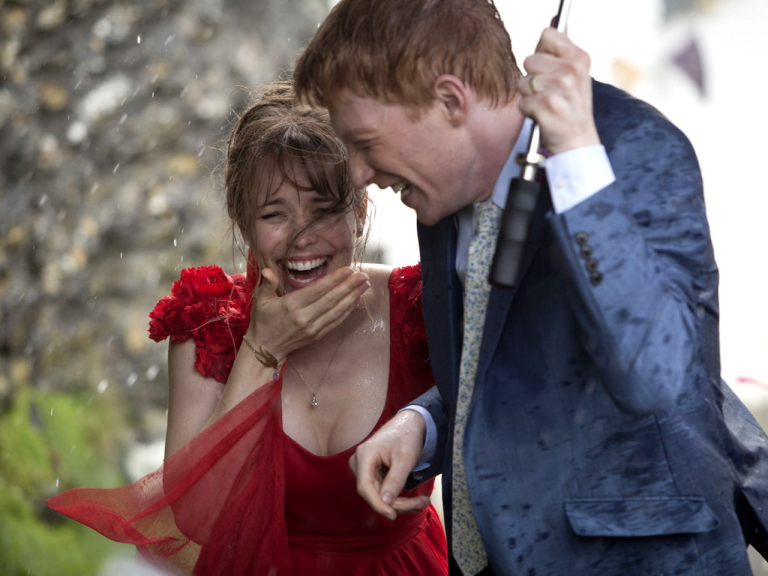 Call me cheesy, I am getting married in a matter of weeks so am bound to be highly emotional, but I LOVED About Time when I saw it at Cineworld cinema in Shrewsbury.

The story goes that, on turning 21, Tim (Domhnall Gleeson) discovers he has inherited the ability to travel in time from his father (Bill Nighy). He decides he must use this gift in pursuit of life’s greatest treasure: love.

Yes, this is a film about  time-travel, but you need to park your DeLorean at the door. This is not a high speed caper around some unbelievable eras, as Nighy's character states, he can't go back and meet Helen of Troy. Instead, the time travel is a mere vehicle in order to help the real subject of the film get told - that of love in all it's forms, and living each day as if it was on purpose.

If you don't already know (and if not where have you been) - the film is directed by Richard Curtis who brings as much of the quintessentially English to his films as is humanly possible.

The film offer heart-on-sleeve emotion. There will be an array of supporting characters you’ll either want to cuddle or smack in the face. There will be a hot American woman and her unlikely British suitor. There will be delirious swearing. And, of course, there will be rain. Lots of rain.

If all the above makes you want to reach for the insulin then you should on paper, though not in reality, pass.

And if you are of the camp that has enjoyed Curtis ever since Four Weddings And A Funeral (like me - it's one of my all-time favourite films) then you’re in for an absolute treat.

About Time is a deeply moving movie. He may have cast pretty much the most adorable romantic leading lady working today (Rachel McAdams, delivering yet another you’d-marry-her-in-a-heartbeat performance), but in truth, the real focus is on fathers and sons.

Gleeson is wonderful and subltly hilarious, both as the early hormonal dork pining after girls so far out of his league they may as well be aliens, and as the latter part of the movie’s magnetic grown-up.

Nighy’s scatty charisma, meanwhile, is the perfect foil - and you may, like me, leave the film pining after their house, their relationship, their life and their ability to have read ALOT of books.

It is their relationship, a beautifully played mix of contradiction, understanding and affection, that elevates it come the end into something properly wonderful and magnificently tear jerking. At once intricately plotted, deceptively simple and proudly British, it’s a romantic Inception — in a tatty jumper.

This film is smart and sweet, funny and genuinely moving. When can I go again?