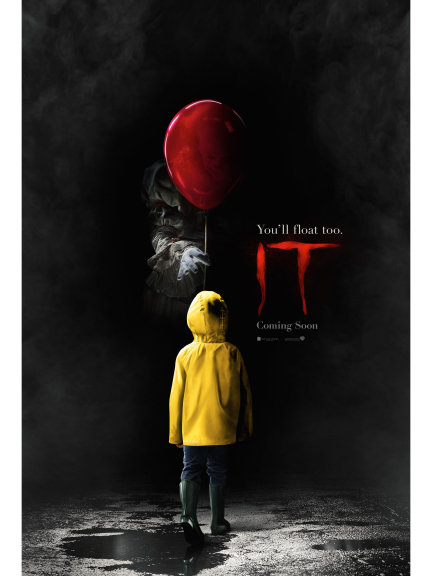 It’s September, 1988. In a small town called Derry, Maine, Billy’s little brother Georgie goes missing. Derry is no stranger to disappearing children, and as the months go by, more girls and boys vanish. Billy and six misfit friends form the Loser’s Club, and set out to defeat an immortal, shape-shifting evil disguised as a clown.

Sound familiar? If you’ve read the novel IT or know of the 1990 TV-movie with Tim Curry you may be aware of the premise. In this 2017 version, Andy Muschietti’s vision is a blast of 80s-nostalgia fun and frights. We took a trip to Cineworld Shrewsbury, grabbed our popcorn, and dived into the wonderful world of Pennywise the Clown…

New kids on the block

The charismatic cast of children carry IT, and unlike a lot of horror films, the script takes the time to invest us emotionally in their stories. We share their pre-teen fears, loves, losses and laughter, and really want them to succeed.

Of course, their fears are the focal point, as Pennywise the Dancing Clown is an inter-dimensional creature which hunts by transforming into your worst nightmare (it’s all explained in the book, trust us). A headless ghost, a diseased leper, a painting come to life... The premise, that underdog children must band together to defeat their personal fears, is set up and satisfyingly paid off.

And IT really does a fantastic job of summoning up the frightening world of childhood. This is a time in your life when the high school bully is as much of a threat as a dark basement or creepy painting, and adults never take you seriously. Scenes with a hypochondriac mother, a sexually abusive father, and a lecherous pharmacist are all played as frighteningly as the ‘real’ monster, Pennywise.

Unless you’re afraid of clowns, a man chasing children in a circus costume could have come across as more sinister than truly disturbing. Fortunately, Bill Skarsgård is a treat as Pennywise; a fascinating performance filled with drool, tittering and charismatic menace. The prosthetics and CGI are all effectively unsettling, but it’s the man underneath which leaves a lasting impression – perhaps not a terrifying one, but an entertaining impression nonetheless.

Throwing it back to the 80s

In the book the children live in the 1950s, but IT capitalises on the recent popularity of 1980s nostalgia in films and TV. If you’ve seen Super 8 or Stranger Things, IT slots in nicely as another Goonies-but-with-gore-and-swearing adventure. The film is peppered with musical references and terrible hair-cuts, and full of plucky kids on bicycles uncovering mysteries.

Genre-wise, IT comes across more as a coming-of-age film than a spine-tingling horror. It all depends on your personal scare-levels. The film’s scariness mainly lies in things jumping at the screen and loud, unexpected noises. Because of this, there’s not much that will stay with you late into the night and keep you awake. But as an action-packed monster-movie filled with wit and 80s charm? IT isn’t clowning around.

Fancy a night out at the cinema? Book your tickets for Cineworld Shrewsbury online here. Don’t miss IT!