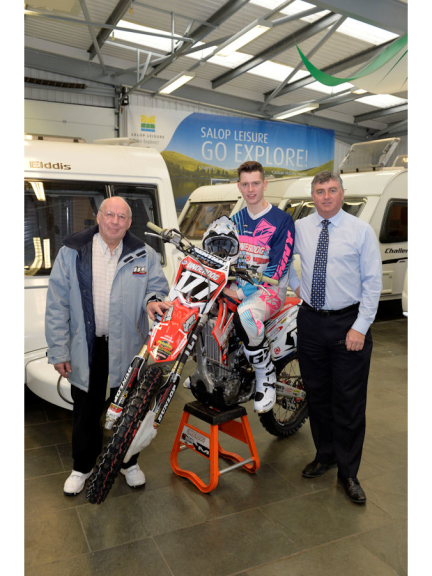 Shropshire-based caravan and motorhome dealership Salop Leisure has announced its sponsorship of the HIMX promoted Hawkstone International Motocross, which is expected to attract thousands of spectators to see some of the worldâs top riders in the county on February 23.

Held at the famous Hawkstone Park circuit, the event has become one of the biggest international motocross races on the calendar as UK and international riders use it as a good pre-season shake down before the Grand Prix and British Championships kick off.

Many of the top names from the sport, including double world MX2 champion Jeffrey Herlings, Tyla Rattray, Todd Waters and Tommy Searle will be taking part. The event is once again scheduled to be televised by Sky Channel Motors TV UK.

Competing in the support race at Hawkstone will be local rider Toby Owen, 17, who rides for Underdog Racing, a Shrewsbury-based team run by Kirk Owen. Toby, who has been riding since he was six years old, competes in the Maxxis and the British Youth Motorcross Championship.

Salop Leisure’s chairman Tony Bywater said the company was delighted to be associated with the HIMX and looked forward to promoting caravanning to thousands of motorcycle enthusiasts.

Salop Leisure provides accommodation for the organisers to use as a race check in centre at the popular event, which was cancelled last year due to severe weather conditions.

HIMX race secretary Gary Ford said it was encouraging to see so many top riders entered for this year’s event. “After what happened this year we are really pumped to make the 2014 race really special,” he added.

Tickets are only available to buy on the gate at £25 for adults, including a free race programme and under 14s are free. Camping is £20 per pitch for a motorhome, tent or caravan, while onsite parking is free.