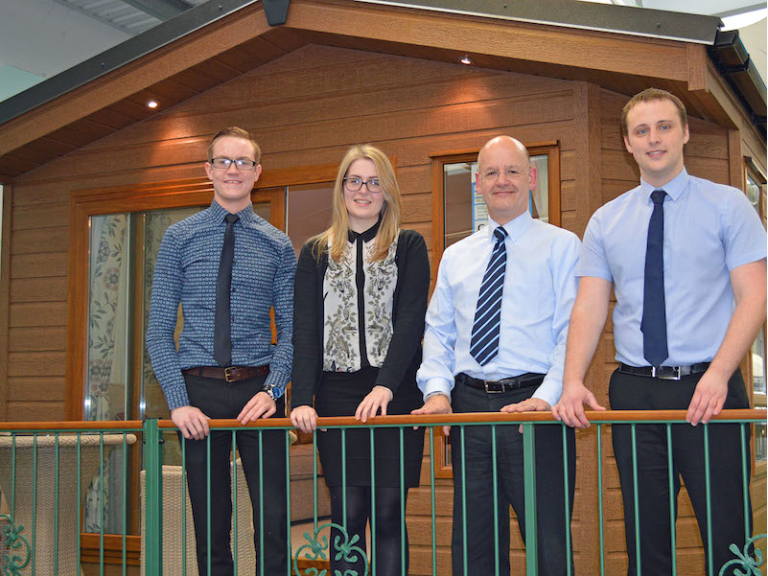 The financial director of a leading Shropshire company has praised the quality and dedication of young people working in his accounts team, following a hat-trick of successes.

“I have always been pleased with the quality of young people that have joined the accounts team, but I think we now have the best team we have ever had,” he said. “There’s such a good spirit amongst the team, they are all academically talented and their dedication to the job shines through.

“With the company continuing to grow, it’s important that we have team members who know the business well. When I started here 21 years ago, we had 45 people on the payroll, now we have 180.”

He was speaking following the success of Andrew Crane, 28, an accounts assistant, who has passed the corporate governance module of the Association of Chartered Certified Accountants (ACCA) qualification.

Andrew, who has worked for the company for eight years and lives in Shrewsbury, hopes to complete the qualification within two years and would like to progress within the business.

“I enjoy working for the company because there’s a nice mixture of people here and it’s one big team,” added Andrew, whose partner, Sarah Howells, is also a qualified accountant with Dyke Yaxley in Shrewsbury.

Andrew’s workmates, Emily Buxton, 18, from Brockton, near Shrewsbury and William Butler, 20, from Shrewsbury, are also celebrating passing their cost and revenue examination, part of the Association of Accounting Technicians (AAT) level three qualification.

Both are half way through the qualification and hope to progress to level four within 18 months.

Emily joined the company 18 months ago after deciding that sixth form studies were not for her. “I wanted to get an apprentice and, as I was already studying business and mathematics in Sixth Form College, an accounts role seemed an obvious choice,” she said

William, who joined Salop Leisure in April, 2013, said: “As well as enjoying the job, there are some great young people working here,” he said. “I think it’s the right company for me and I want to go as far as I can in accounting.”