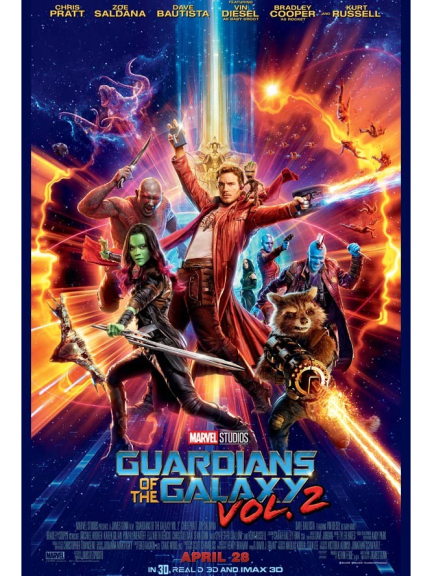 Our favourite rag-tag band of space heroes are back in another explosive adventure! We got the chance to catch Guardians of the Galaxy Vol. 2 at Cineworld in Shrewsbury on its opening weekend, and thoroughly enjoyed the latest instalment in the Marvel cinematic universe.

On the road again

Set to the 80s tunes of Awesome Mixtape #2, Guardians of the Galaxy Vol. 2 follows Peter Quill (aka Starlord), Gamora, Drax, Rocket, and the adorable Baby Groot, as they unravel the mysteries of Peter’s true parentage. Who and, more importantly, what is his father? With stupendous action and incredible visuals, this really is a fun-filled popcorn flick, so we made sure to grab ours from the snack kiosk before heading into the screening.

So what’s new for the sequel? Living up to their name, the gang must guard the galaxy (again), from another all-powerful foe hell-bent on its destruction. Chris Pratt, Zoe Saldana, Bradley Cooper and Vin Diesel do a brilliant job of reuniting the dysfunctional but loveable team. Dave Bautista as Drax gets a much bigger role in Volume 2, and he proves he has a fine pair of acting chops, shining both in the comedy and in the heavier, emotional scenes.

We don’t want to spoil anything, but new characters include an easily-offended race of golden aliens, an empath called Mantis and the mysterious Ego, played by Kurt Russell, who might just be Starlord’s dad. Keep an eye out for a cameo by Sylvester Stallone, too!

As well as lots of big laughs, there are even more touching moments in the sequel than were in Volume 1. This film takes the time to explore the characters and their (mostly rocky) relationships in greater depth and serve up some tear-jerking scenes.

The central theme is family, and how it comes in all shapes, sizes and colours. Peter struggles with accepting the truth about his parents, and Karen Gillan returns as Gamora’s evil sister Nebula, though as the story unfolds we learn she might not be so evil after all.

Get ready to rumble

But it’s not all weepy scenes and absent father figures. There’s plenty of fantastic action to keep your heart pumping, including a mad opening battle against a many-toothed, many-tentacled space beast, an intense starship dogfight, and a super-powered fist fight finale.

Make sure to catch Guardians of the Glaxay Vol. 2 at Cineworld Shrewsbury, by booking your tickets here. The wonderful, attentive staff and movie-magic ambience make it a must-visit, and this is the perfect film to drop in and see. Trust us, you’re in for a blast!