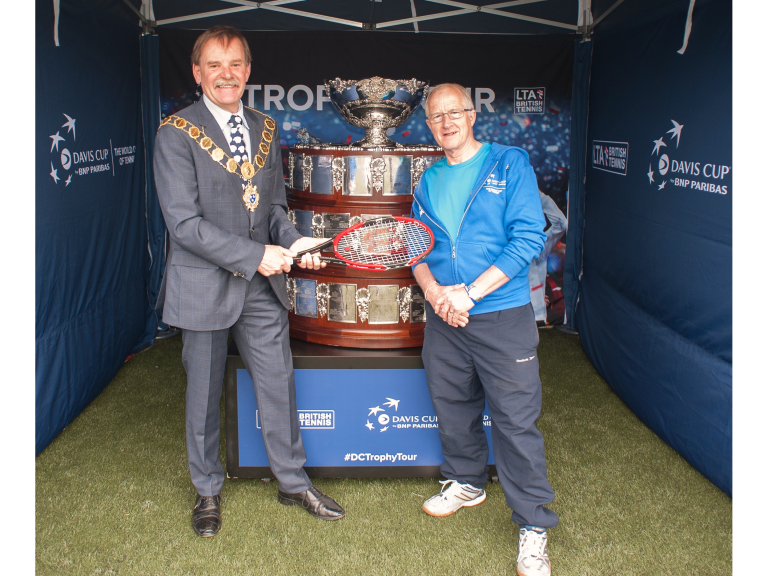 Fresh from the successful visit of the Davis Cup by BNP Paribas Trophy Tour to Shropshire, tennis clubs around the county are now looking forward to opening their doors for the first Great British Tennis Weekend of 2016.

A host of Shropshire clubs are supporting the popular Lawn Tennis Association initiative by running free activities this weekend to encourage more people to pick up a racket and see how much fun playing tennis is.

It follows swiftly on from last weekend when Shropshire welcomed the Davis Cup, one of sport's most famous trophies, as part of the iconic silverware's trophy tour of Great Britain.

The Davis Cup spent the morning at Shrewsbury’s Monkmoor Recreation Ground, where the courts have been impressively refurbished, while a new 10-week family coaching course was also launched.

Many local people took the chance to have their picture taken alongside the Davis Cup, the trophy so memorably lifted by an Andy Murray-inspired Great Britain last November.

The trophy then headed to Telford Tennis Centre where Greenwich Leisure Limited, its new tennis provider, held an official launch to mark their new partnership.

Bob Kerr, the chairman of Tennis Shropshire, said: “There were lots of people about to see the trophy and we had quite a lot of court activity too. Tennis Xpress, a family orientated beginners’ course, was launched at Monkmoor.

“Shropshire’s Cathie Sabin, the LTA president, came along to Telford and it’s always nice to see her. She’s in her last year as president and is always keen to help out locally.”

A weekend of great tennis

Attention now turns to the first of two Great British Tennis Weekends to be held this year, with county clubs hosting events on both Saturday and Sunday.

Bob added: “This is an initiative where local clubs literally throw their doors open. They usually have a range of activities and encourage local people to go along and have a go at tennis, to get involved.

“Very often there’s one or two enticements, perhaps reduced club membership, or reduced coaching costs, so it's always well worth going along.

“It’s become a popular addition to the calendar and it's a chance for clubs to promote what they can offer their local communities.

“In this day and age, it’s no use for any sports facility, any sports club, just to sit behind closed gates and hoping that one day somebody might just come walking past. You’ve got to be proactive in attracting more people to get involved.”

Pictured: Councillor Miles Kenny, the Mayor of Shrewsbury, and right, Bob Kerr, the chairman of Tennis Shropshire, with the Davis Cup during its visit to Shrewsbury’s Monkmoor Recreation Ground last weekend. Picture by Richard Dawson.