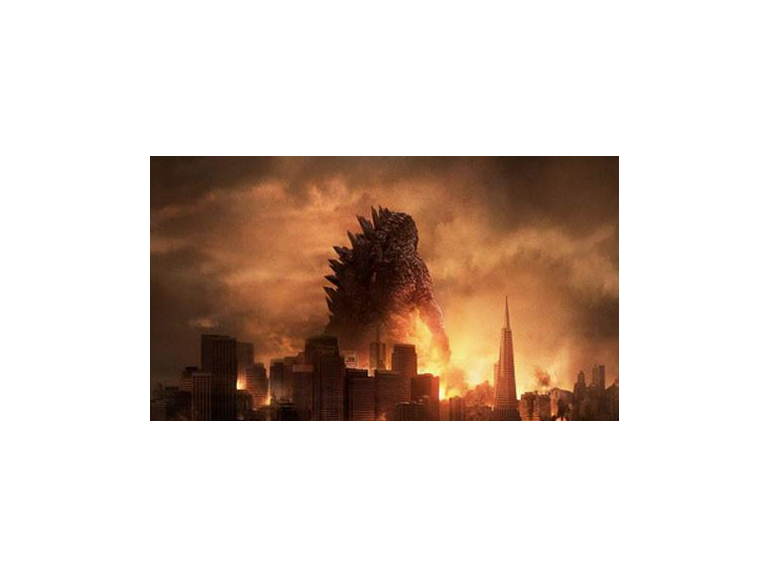 It may be the latest in a long run of Godzilla movies, and it may have it's own take on the epic tale, but this dark tale, with amazing special effects and a decent cast is worth a watch!

While British director Gareth Edwards's jaw-dropping Godzilla may not have the depth of the 1954 original, it exhibits an appreciation and understanding of what made that movie great. With his terrifying size tempered by an oddly small and not-so-terrifying  scaly-dog face, Edwards's "monster" emerges as an awe-inspiring noble beast.

Edwards's lonely samurai dinosaur emerges from the depths as an avenging angel, safeguarding the natural order and the film is full of not-so subtle messages about how mankind always things it knows better than nature and maybe we should be leaving some things to a natural order.

Things get off to a flying start when we meet a 'nuclear' family (mother, father, son) being torn apart as an atomic reactor falls prey to a "natural disaster". After the initial highly emotional action scenes, we leap forward again and the traumatised young son has grown into bomb-disposal expert Ford Brody (the brilliant Aaron Taylor-Johnson), taken away from wife Elle (the not-so-brilliant Elizabeth Olsen) by news of his dad Joe's arrest in Japan for trespassing upon the radioactive ground where his home and workplace once stood. Racked with guilt, Joe (Bryan Cranston) has become a cracked conspiracy theorist, convinced that the government are hiding something. Which, of course, they are – albeit not quite what Joe expected.

The film cost a reported $160m and the size and scale of eerything about it reflects that budgest. Including the horryfyingly monstrous mantis-like creatures, Godzilla's nemeses.

In the middle of all this is Ken Watanabe, smartly cast (for both narrative and marketing purposes) as the one man who understands the true nature of Gojira's resurrection (he uses the original name once, before reverting to the anglicised Godzilla). Other supporting roles are inevitably more sketchy, most notably Brit Sally Hawkins who gets all but lost in the mix as we move toward the increasingly catastrophised third act wherein destruction takes hold as (human) character inevitably takes a back seat. My advice would be to seek out the biggest 3D auditorium and allow the movie to roar majestically right in your face! Catch it now at Coneworld Shrewsbury,