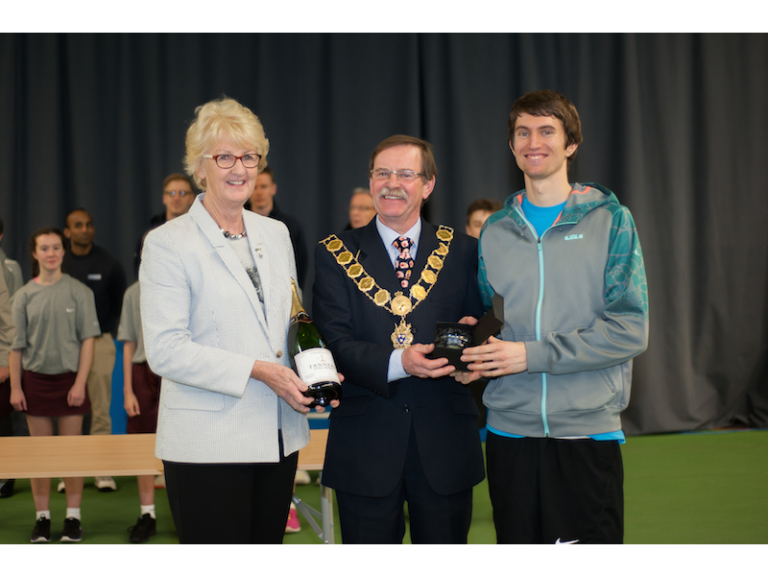 German ace Yannick Maden held his nerve to win a thrilling Aegon GB Pro-Series final as Ed Corrie's hopes of adding to his doubles triumph a day earlier were dashed in front of a big crowd at The Shrewsbury Club.

The unseeded Maden, from Stuttgart, hit back from losing the opening set to eventually run out 3-6, 7-5, 7-6 winner in the final of the $10,000 tournament on Saturday afternoon

An enthralled crowd of about 500 - a record for The Shrewsbury Club - were treated to an excellent final worthy of the occasion which lasted nearly three hours with both players receiving a standing ovation at the end.

Maden, 26, currently ranked 658 in the world, was pleased to mark only his second appearance in a UK tournament - he lost in the first round at an event in Sunderland the previous week - with a stunning victory.

"I'm delighted to have won," he said. "I didn’t expect to do as well as I have done this week. There was great support from the crowd and it was a very nice atmosphere to play in. I have enjoyed playing here at The Shrewsbury Club."

Runner-up Corrie, who teamed up with fellow Brit Dan Smethurst to win the doubles a day earlier, added: "It was one of the better matches I've ever been a part of, but obviously I'm gutted to come out on the losing side. It was definitely one of the most challenging, highest standard and closest matches I've ever played."

Corrie, from Hertfordshire, playing on the eve of his 28th birthday, impressively raced into an early lead, but Maden, having knocked out two more British players in the previous two rounds, No 2 seed Liam Broady and Dan Cox, then battled back in style to ultimately come out on top in a high quality final at the Sundorne venue.

Despite being disappointed at just missing out on adding to his doubles success, Corrie, ranked 489 in the world, could still reflect on a highly productive week in Shrewsbury.

Julie Piper, the tournament director for the LTA, hailed the tournament once again as an outstanding success and thanked The Shrewsbury Club for being such impressive hosts.

She said: "It's been another good week and this tournament just goes from strength to strength. There was again a great crowd for the final and I seem to say it each year, but I think it was the best we've had.

"In this country we very rarely get such great support and to have that here is wonderful. It's great for the players. I'm very much looking forward to returning in November for the ladies $10,000 tournament.

Dave Courteen, the managing director of The Shrewsbury Club, added he was delighted that so many local tennis fans enjoyed the action throughout the week leading to such an excellent attendance for the final.

"It's been another amazing week here at The Shrewsbury Club," he stressed. "The profile of the tournament locally is building and so we have more and more people coming, both during the week and for the final.

"It was great that we had a British player in an exciting final and a number of other British players in action throughout the week.

"The crowd for the final was a record. We filled the car park, filled all the seats and there were lots of people watching from the balcony as well. It's a real tribute to the town of Shrewsbury how everyone gets behind events like this as the final of a $10K tennis tournament would not normally be watched by as many people."

He added the visit of the Davis Cup, so memorably won by an Andy Murray-inspired Great Britain in Belgium in November, for the final two days of The Shrewsbury Club tournament had proved extremely popular.

"To have the Davis Cup here has been a coup for the club," he said. "It's been lovely to see the excitement on children's faces and how many people have wanted to have their photograph taken with it. They've been amazed with the size of the trophy and it's been great for the town to have it here."

The spectators for the final included Cathie Sabin, the Shropshire-based LTA President, Nick Weal, the coach of the victorious Davis Cup team, and the Mayor and Mayoress of Shrewsbury, Councillor Miles Kenny and his wife Aurona.