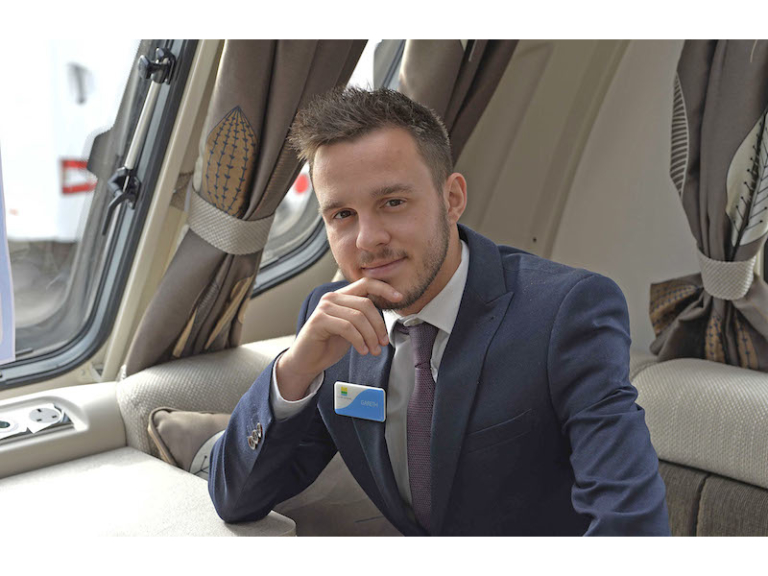 Enthusiastic Gareth Cole has proved that a Christmas job working in Santa’s grotto at award winning caravan dealership Salop Leisure is good for your “elf” and career.

For Gareth, 21, has recently been promoted to touring caravan sales executive with the Shrewsbury-based company, a move he described as “an early birthday present”.

He’s come a long way since first making contact with Salop Leisure in 2012 when involved in a project on the holiday homes industry with fellow travel and tourism students at Shrewsbury Sixth Form College.

When sales and marketing manager Scott Higgins later contacted the college to offer students part-time work helping with Santa’s grotto in the run up to Christmas, Gareth jumped at the chance to be an elf.

He then helped with parking duties at the company’s West Midlands Caravan and Motorhome Spring Show and at the opening of the Love Plants specialist plants centre.

Impressed by his enthusiasm and commitment, the company decided to employ Gareth as an assistant in the busy accessories department in May 2013. Last month, he applied for a vacancy with the touring sales team, secured the post and has been busy selling caravans ever since.

“This job gives me a lot more freedom to roam around the business meeting customers,” he said. “Being quite young, I was expecting customers not to want to speak to me but that couldn’t be further from the truth.

“I love working for Salop Leisure because the staff and customers are so friendly and it’s a great atmosphere to be in. I enjoy meeting people and have built up a good knowledge of touring caravans by working in the accessory department. I want to keep progressing through the company.

“I must thank managing director Mark Bebb, accessories department manager Andy Harding and touring sales manager Justin Edwards for giving me the opportunity to work for the company.”

Salop Leisure’s chairman Tony Bywater said: “Bright, young people like Gareth are the future of our business and we are delighted that he is developing his career with us.”