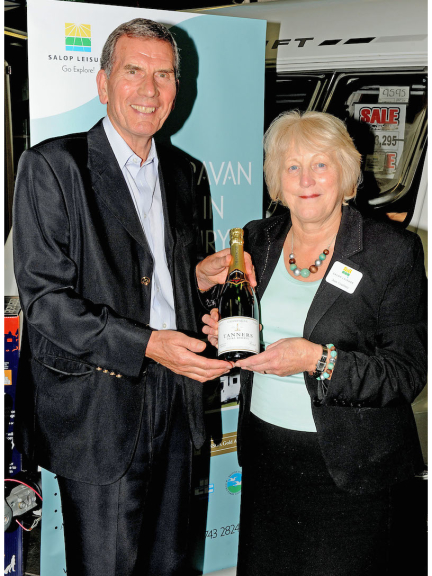 A woman described as a “fantastic ambassador” for the company and the caravan industry is celebrating 40 years’ service to Shrewsbury-based business Salop Leisure.

Jean Courtney, 67, joined the award winning caravan and motorhome dealership, which is based alongside Shrewsbury bypass at Emstrey, on September 7, 1975 when it was located at Meole Brace, Shrewsbury.

She initially worked as a cleaner, whilst still working part-time as a hairdresser and moved into the accessory shop before being appointed receptionist 35 years ago. Now she’s the friendly voice and welcoming face of Salop Leisure, known by thousands of customers across the country.

She has an amazing ability to recognise telephone callers’ voices, even if she has not spoken to them for a long time. Despite chalking up 40 years’ service, has no plans to put her feet up just yet.

Last year, the National Campaign for Courtesy presented her and the company’s chairman, Tony Bywater, with a certificates in recognition of exceptional courtesy. Campaign chairman Peter Foot said: “If there were a prize for the best smile in a voice, then I think Jean would win it every time.

She also won a bronze award in the Mayor of Shrewsbury’s Community Awards in recognition of her achievements towards enhancing the social well being of the area.

For the past 16 years, she has co-ordinated a Christmas Shoebox Appeal for the Samaritans Purse Appeal, her prime motivation being to put a smile on children’s faces at Christmas and to let them know that they are not forgotten.

So what’s the secret of Jean’s long service? “I can say hand on heart that I have enjoyed every day working at Salop Leisure. When I started, we all pulled together like a family and 40 years later it’s still a family-orientated business

“I have had a lot of pleasure watching the company grow and progress over the years to become the top caravan dealership in the UK and I feel part of that success, which has been achieved by everyone putting their heart and soul into the business.

“I have made a lot of friends over the years by working in the leisure industry and I think it keeps me feeling young by working with so many lovely people.”

Jean is married to Den and they have three children, nine grandchildren and one great grandchild. “Material possessions are nice but good health, happiness and a loving family are more important to me,” she added.

Mr Bywater, who hired her back in 1975, recalls: “Jean was always smiling and she had a terrific personality. She has been an absolute joy to work with for the past 40 years.

“Jean fronts the business on reception and is so well respected by our customers, park operators and everyone associated with the caravan industry. She has been a fantastic ambassador for the business and played a major role in success of the company, which celebrates its 50 anniversary next year.”