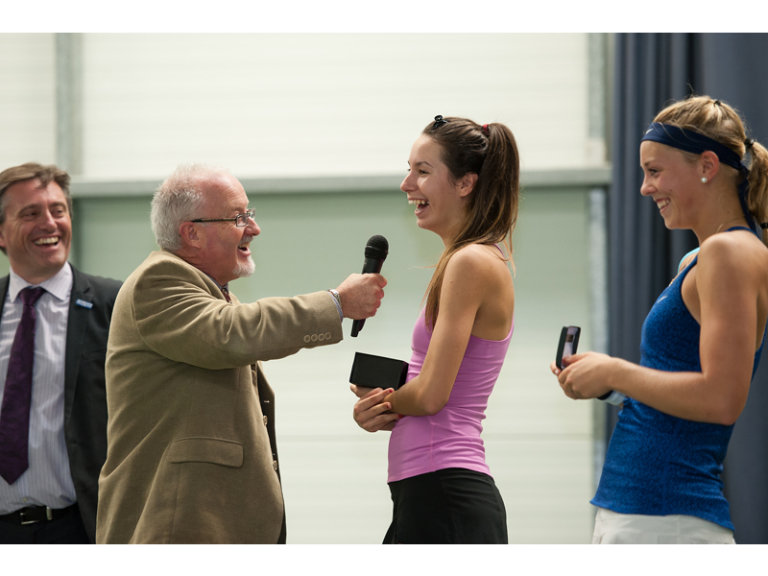 French qualifier Oceane Dodin completed a memorable week by beating in-form German Carina Witthoeft in straight sets to win the final of the 25,000 dollar Aegon GB Pro-Series event at The Shrewsbury Club.
Dodin had to come through two qualifying rounds to take her place in the 32-strong main draw for the popular event which featured eight of Europe's rising tennis stars currently ranked in the world's top 200.
Excellent form
But the highly promising 17-year-old from Lille maintained the excellent form she had produced all week at the Sundorne Road venue to prevail 6-4, 6-3 in the final to deny Witthoeft a third successive tournament victory.
Witthoeft, 19, seeded three and who has rocketed to 132 in the world rankings after her recent exploits, this time had to settle for runners-up spot following her tournament triumphs at Barnstaple and in Saint-Malo in France earlier this month.
Unseeded
The unseeded Dodin, ranked 559 in the world, wrapped up an impressive victory in just under an hour after a hard-hitting contest enjoyed by an appreciative crowd of more than 200.
Dodin, who enjoyed an early break of serve in the opening set and never looked back, will now enjoy a few days rest before competing in a 50,000 dollar event in France.
Julie Piper, the LTA tournament director, said it had been a highly successful tournament and thanked The Shrewsbury Club for being such impressive hosts.
Dave Courteen, the managing director of The Shrewsbury Club, was delighted with the quality of tennis played throughout the week culminating in an entertaining final.
He said: "The tournament was a great success and the quality of the tennis was the best we've ever seen at Shrewsbury. For a £25K tournament, it was quite amazing.
Excellent young players
"The two girls that reached the final are both excellent young players and I'm sure at some stage in the future they are both capable of progressing to the world's top 20, perhaps even the top 10.
"It was also very pleasing to see the town of Shrewsbury support the tournament so well and we had the highest attendance throughout the week that we've ever had.
"Our members really embraced the tournament and enjoyed having so many up and coming professional players with us and for the final it was lovely to have the support of local MP Daniel Kawczynski and also the Mayor of Shrewsbury, Councillor Beverley Baker.
"We were also very pleased to welcome Michael Downey, the chief executive of the LTA, for finals weekend. He came to Shrewsbury to see how we put a tournament on and went away very impressed."
More