A leading Shrewsbury-based business and two of the town’s top sports clubs have joined forces to attract new spectators to cricket and football matches.

Season ticket holders at Shrewsbury Town Football Club and those wearing the club's football shirt will qualify for either one free drink or an ice cream at Shrewsbury Cricket Club's Salop Leisure Knockout T20 Trophy tournament, which begins on Friday, July 15.

In addition to sponsoring the exciting T20 tournament, award-winning caravan dealership Salop Leisure has agreed to pay for the drinks and ice cream in the hope that more football fans will be encouraged to watch Shrewsbury Cricket Club this summer. 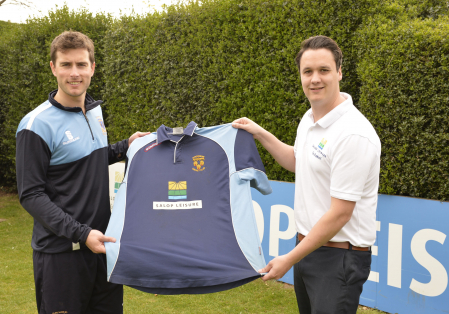 The popular Salop Leisure Knockout T20 Trophy tournament is spread over three Friday evenings.  Hosts Shrewsbury defend the title against Bridgnorth on Friday, July 15 and former winners Oswestry play Shifnal on champions Friday, July 22. The winners of both matches will meet in the final on Friday, August 5 All matches start at 6.15pm and are held at Shrewsbury Cricket Club.

"Hopefully, people who have never have been to the cricket club before will be attracted by the high standard of exciting cricket on display from the county's top cricketers," said Scott Higgins, holiday home sales and marketing manager at Salop Leisure, who have recently signed a new three-year sponsorship deal with Shrewsbury Cricket Club.

"It would also be great if cricket fans supported Shrewsbury Town when the cricket season finishes. Both clubs help to put our town on the map and our company is proud to be associated with them as a sponsor."

Ed Foster from Shrewsbury Cricket Club said: "Twenty20 cricket is very popular around the world, so it's great that there's a high quality competition in Shropshire for both the players and spectators to enjoy. There's a lot of friendly rivalry between the four participating clubs, which will undoubtedly contribute to some tense and exciting cricket not to be missed."