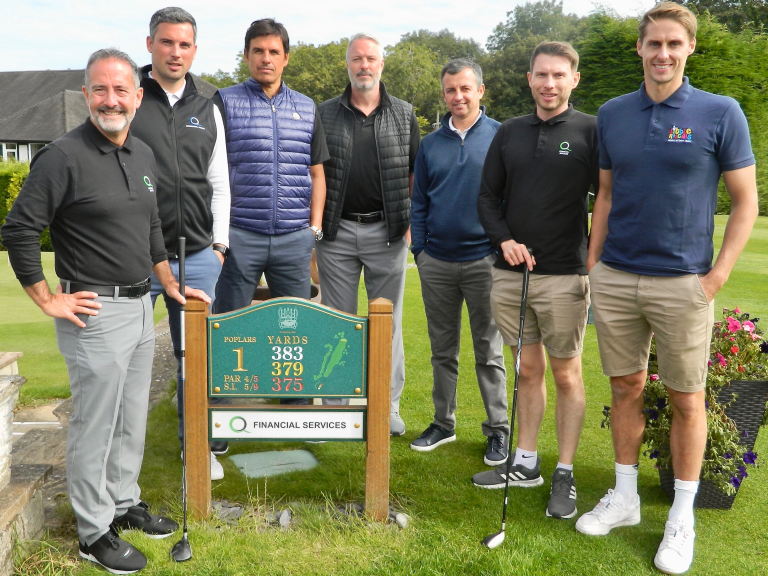 Chris, who led Wales to the semi-finals of the 2016 European Championships, was joined by his assistant manager Kit Symons, also an ex-Wales international, as they took part in an event organised by Q Financial Services at Wrekin Golf Club in Wellington.
Over £9,000 was raised for the Little Rascals Foundation, which provides help and support to Shropshire youngsters with disabilities, and their families.
After being one of more than 60 golfers to play the picturesque course, Chris held a question and answer session with Sky Sports reporter Johnny Phillips. An auction, which included a signed shirt and boots from Real Madrid’s Welsh star Gareth Bale, also helped boost the total raised.
Shrewsbury Town midfielder Dave, who launched the Little Rascals Foundation with his childhood friend Ben Wootton in 2017, said: “It’s great that Chris came along and gave his time. It’s so important for the Foundation that we can put on days like this.
"Having Chris and Kit here, as well as Johnny Phillips, helped bring more people in and helped us raise more money for the Foundation.
“It’s amazing that Q Financial Services organised this event to benefit the Foundation. Some children from Severndale in Shrewsbury, which we work closely with, came along, which was great. The day allowed the golfers to see what we do with the Foundation.”
Chris was pleased to offer his support to the charity set up by Ben and Dave, who was a regular member of his international squad .
"I think when you see players get north of 30 they go into different things,” added Chris. "I don’t know anybody else that’s doing what’s Dave doing, so I think it’s great for him and a credit to him that he’s got himself involved.
“Little Rascals is fantastic - it’s going very, very well and we’re more than happy to come and support it.”
Gareth Smith, a teacher at Severndale Specialist Academy, was joined by Year 1 and Year 2 students, and they enjoyed their visit to Wrekin Golf Club, where they spent time in the Little Rascals disco dome.
He highlighted the important role played by the charity: “We work closely with Little Rascals,” he said. "A lot of our students go to an after school club at their indoor soft play centre and a lot of our families work with Little Rascals during the school holidays. It’s a brilliant organisation.
“It’s a really important relationship, both for the school and the families as well, the respite it provides. It’s important to have that inclusive space where children with special needs and their siblings can come and all play together."
Mitch Gough, a fellow director of Dave’s at Q Financial Services, which has offices in Wellington and Shrewsbury, and also a trustee of the Little Rascals Foundation, was delighted the golf day proved so popular with guests.
He said: “A lot of work went into making the day a success. As a director of a financial services company, it’s really nice to give something back to a local charity.
“It was fantastic to have Chris, Kit and Johnny with us and they couldn’t do enough for us in supporting such a good cause.”
Ben Wootton, from the Little Rascals Foundation, added he was grateful to everyone who supported the day and thanked Wrekin Golf Club, whose captain Danny Oliver has selected the Foundation to be his chosen charity this year.
He said: “It was a brilliant day and everything went well. Thank you to everyone who came along. We were delighted with the total raised which will make a big difference to the work we are able to do with the Foundation."