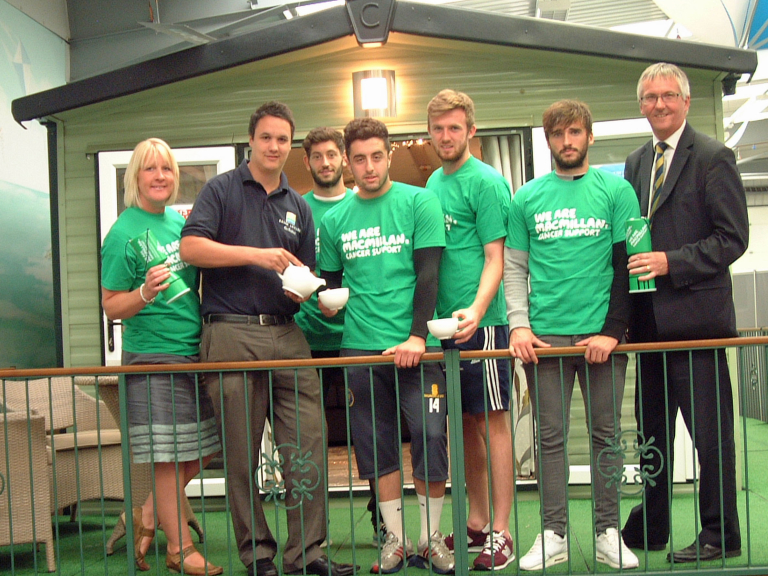 Stars from Shrewsbury Town Football Club and the town’s award winning caravan dealership have signed up for this year’s World's Biggest Coffee Morning on September 27 organised by Macmillan Cancer Support.

Both Salop Leisure and the football club will beholding coffee mornings on September 27. The football club also plans to make Macmillan its featured charity for a home match.

Helen Knight, Macmillan Cancer Support’s fundraising manager in Shropshire, reported that a record 1,200 Shropshire people and organisations - 40 per cent up on 2012 – have so far registered to hold a fundraising event for the charity’s World's Biggest Coffee Morning.

“It is great that larger organisations like Shrewsbury Town and Salop Leisure are embracing the World's Biggest Coffee Morning this year,” she added. “Salop Leisure are fantastic supporters of Macmillan Cancer Support and continually coming up with new ideas to raise money for the charity.

“Shrewsbury Town is doing an important job in helping to raise awareness of the work that Macmillan does in Shropshire and its great to have them onboard.”

Supporting the charity is particularly close to the heart of Martin James, whose son, Adam, was diagnosed with cancer of the femur around five years ago when he was 25. Macmillan were there to support Adam and his family after the diagnosis and throughout the treatment, which included extensive surgery and chemotherapy.

Adam was given a metal replacement for his femur and knee at Oswestry Orthopaedic Hospital, Gobowen and the cancer has been in remission for more than three years. Despite reduced mobility, he still enjoys cycling and plays cricket with his dad for Bomere Heath 3rds.

“We first came into contact with Macmillan when Adam was diagnosed and they have supported us ever since,” said Martin. “It’s probably the most devastating news that a family can have when you are told that a loved one has cancer.

“The Macmillan nurse sat down with us, talked honestly about the treatment options and listened. That was comforting and gave us confidence in the treatment that Adam was having. Although no one could say what the prognosis would be, we wanted to know exactly what was going on and where we stood because that was the only way we were going to cope with the news.

“Macmillan nurses are there as support and they become almost like your family because of the way they respond to you. When you are at your lowest point, there is always someone there with reassuring words and empathy.

“Adam was positive about the treatment right from the word go and the doctors at the Orthopaedic Hospital and Christies Hospital in Manchester are amazing.”