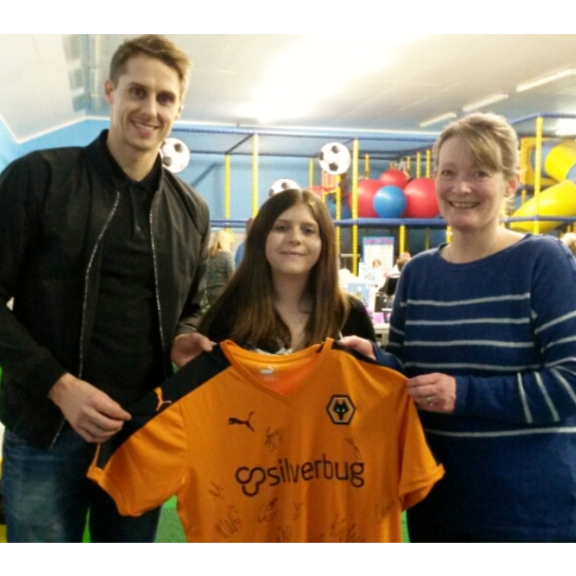 Signed football memorabilia - including a Wales shirt - is being auctioned to raise funds for a Shropshire children's cancer charity.

It is all thanks to Little Rascals Indoor Soft Play Centre in Shrewsbury and the generosity of Sarah Gibson, a Shrewsbury mother.
Sarah, from Sundorne, won the Wales and Wolves football shirts, signed by both squads, in a special competition run by Little Rascals, the play centre co-owned by football star Dave Edwards.
Sarah and her son Jacob, two, received a number of other prizes, including a party at Little Rascals, which opened at Monkmoor's Maverick Business Park in November.
However, she has decided to donate the shirts, together with a football signed by the Wolves squad, to the Harry Johnson Trust, which was set up by Sally and Stephen Johnson in memory of their son, Harry, from Vennington, near Shrewsbury, who passed away in July 2014, aged just seven, after a brave battle against a rare childhood cancer.
The Trust aims to offer support to children in Shropshire and Mid Wales receiving care from the Oncology team at Telford's Princess Royal Hospital.
Wolves and Wales international midfielder Dave, who met Sarah and Sally at Little Rascals last weekend, said he was delighted the memorabilia would be auctioned to raise funds for the charity.
He said: "We held a big competition just before we opened with lots of nice prizes for people who shared our Facebook posts. There were loads of games to be won, a party and also some signed football memorabilia.
"Sarah won the prize on behalf of Jacob, her little boy, and then very kindly said that she would like to donate some of the prizes to the Harry Johnson Trust, which is a great gesture.
"I've been involved in the Trust having played in a charity football game in Shrewsbury last year, so hopefully the signed items can raise some money for them."
Sarah said she was pleased to be able to support the Trust, and added: "My friend's little girl is in recovery from cancer and was diagnosed at the same time as Harry. I also have a friend who worked with Sally and I know how much the charity do for children with cancer and how much it can make such a difference.
"We're in hospital quite a bit with Jacob and you don't realise until you're in that situation how much it all helps, so I just wanted to do something to hopefully raise some money for the Trust."
Sally said: "We're really grateful to Sarah and to Jacob for donating some of the things they won at Little Rascals to the Harry Johnson Trust. It will be really good to be able to auction them off and hopefully Wolves and Wales supporters will be able to get their hands on some memorabilia while at the same time raising money for Harry's Trust.
"We had never met Sarah before, so we're really honoured to have her support."
The football memorabilia, beginning with the signed Wolves shirt, will be auctioned via ebay - with a closing date for bids of this Thursday, March 10 (9pm) - at http://www.ebay.co.uk/itm/1918 15995123?ssPageName=STRK:MESEL X:IT&_trksid=p3984.m1555.l2649
More