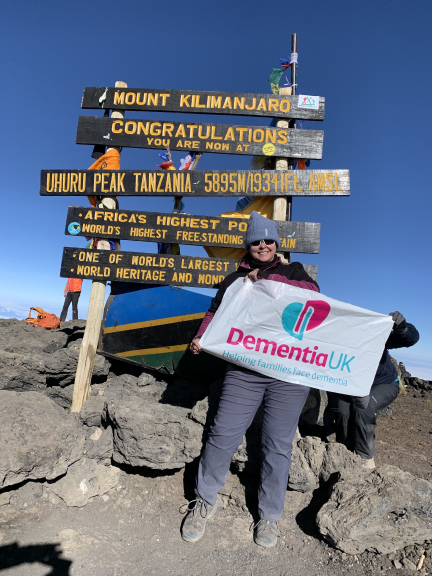 The daughter of Shrewsbury Town legend Chic Bates has been overwhelmed with support after she went public about her dad’s diagnosis with dementia and has spoken of new research linking the condition to football.

Llarni Bates, a senior legal assistant with Shrewsbury legal firm Wace Morgan, decided to climb Mount Kilimanjaro to raise money for research into dementia and is well on the way to collecting £10,000 this year.

After promoting her challenge in the media she was contacted by a huge number of fans of her dad Chic, who had a 40-year relationship with Shrewsbury Town as a star striker and manager, and who was formally diagnosed with Frontotemporal Dementia and Alzheimer’s in 2013 at the age of 61.

“I was overwhelmed - so many Shrewsbury Town fans got in touch to sponsor me and pass on their very kind comments about his footballing days and wish me support.

“Even a Swindon Town fan contacted me and donated some money as my dad played for Swindon late 1970s and was assistant manager in 1990s.

“I have received a huge number of messages from people wanting to share their own experiences of loved ones suffering with dementia and giving me their best wishes and so I do hope that the profile of the condition has been raised locally.”

She described her climb of Kilimanjaro, one of the world’s highest mountains, as the best but also the most gruelling experience of her life.

“I saw a dead person being carried down on a stretcher on day four of my journey.  The summit night, which commenced at midnight, was simply horrific - I sat on the ground at one point probably after seven hours of climbing and said ‘I can’t do anymore’.

“I cried twice with exhaustion! I pushed myself to a limit like never before but kept thinking about my family and everyone’s support, kind messages and generous donations which helped me to get to the summit.

“It was an incredible trip and I am so grateful to everyone who was involved. The group I was with were amazing – we all got struck by altitude sickness – but everyone encouraged and supported each other.”

Llarni is still collecting but expects the challenge to raise around £6,000 for Dementia UK. In addition, she and three friends have dedicated this year to raising awareness and funds for Dementia UK by organising quiz nights and cycle challenges and they all recently ran the Amsterdam Marathon, meaning that in total this year and they will have collected around £10,000 for the charity.

She has also commented about university research just published which showed that footballers were three times as likely to suffer with dementia than other people, due to heading heavy balls.

“It is something we have suspected for some time and I am pretty sure it is linked as dad has frontal lobe dementia and was so young – only 61 - when we noticed the changes.

“We know of other former footballers who are in the same position as my dad now and are glad that the link has been proven but are disappointed that the FA has swept this matter under the carpet for so long.

“There is no prevention or cure for this disease at the moment but the research may prevent others suffering the same fate as my dad,” said Llarni

Anyone wishing to donate to her cause can still do so at https://www.justgiving.com/fundraising/llarnibates?utm_id=124