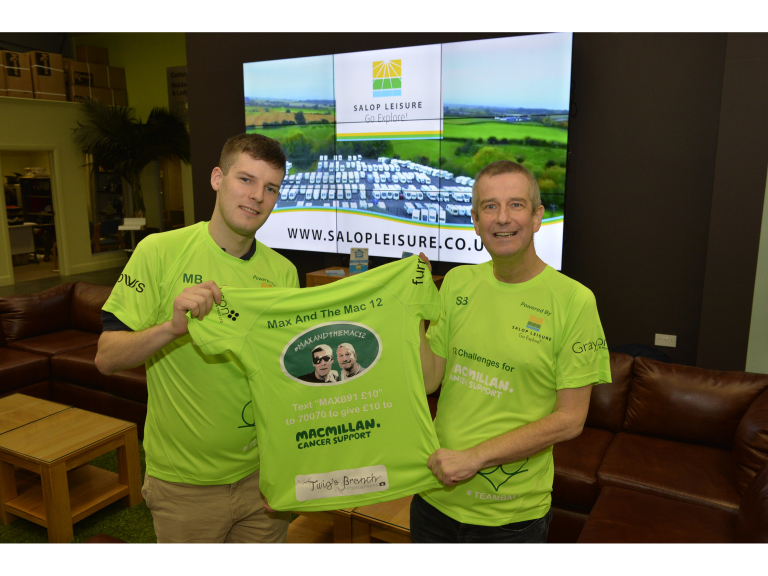 A son’s mission to raise £8,000 for Macmillan Cancer Support to say thank you to the charity for supporting his father who is battling terminal cancer, has got off to a flying start as he prepares for his next challenge this weekend.

He has already taken on a solo bungee jump at Tamworth Bungee Club in February and was joined by workmates Emily Ridge and friend Ash Peille for the Dash of the Titan mud run in Nottinghamshire.

The challenges to date have raised £3,467, which includes a £1,200 contribution from Salop Leisure workmates Tony Cooke and Ed Glover who took part in The 2016 Macmillan 4x4 Challenge.

Next up is a team challenge on Sunday. Max with Salop Leisure workmates Scott Higgins and Chris Evans and friends John Marshall and Steve Drury will take on local motor dealership group Greenhous in a race to sit on half the 9,875 seats in Shrewsbury Town’s Greenhous Meadow stadium. Both teams are being sponsored for the challenge with all the money going to Macmillan Cancer Support

Max is also preparing to perform a scene from ‘Much Ado About Nothing’ in The Square in Shrewsbury for Shakespeare Day on April 23. There will also be a Shakespeare themed treasure hunt with a poem leading hunters to different places in the town where there are letters.

When all the letters have been found they will form the name of a Shakespeare character and the overall winner will receive a £50 cash prize. There will also be other prizes for people who everyone who successfully complete the hunt.

Performances of Shakespeare will take place throughout the day and volunteers from Macmillan Cancer Support will be collecting donations in buckets from spectators.

Salop Leisure is organising a charity football match against Greenhous at the Greenhouse Meadow Stadium on May 13, with the motor company out to avenge a 3-1 defeat last year.

Max decided to set himself the challenges after his father, Steve, was diagnosed with oesophagus cancer last October, just two days after they had watched their beloved Sheffield Wednesday beat Arsenal 3-0 in the League Cup.

Initially, the family, who live in Bayston Hill, near Shrewsbury, was told that the cancer was potentially operable and curable, but an exploratory operation in December discovered that it had spread and was now incurable. Steve is now undergoing chemotherapy to extend his life.

Max said the support from workmates, family, friends and sponsors had been overwhelming and he’s hoping now to exceed his £8,000 fundraising target.

“The money raised by MaxAndTheMac12 will help Macmillan to reach more people with cancer and improve the quality of care and support available to them during their cancer journey,” he added.

Other events in the challenge series are the Rough Runner Challenge on May 15, Shrewsbury Half Marathon on June 19, the National Three Peaks Race from July 1-3, a foot golf tournament on July 24, white water rafting in Llangollen and a 24 hour squashathon at Kingsland Squash Club, Shrewsbury in August, Shrewsbury Sprint Triathlon on September 4 and a 106 kilometre ride at Ludlow Cycling Festival on September 18.

As an extra fundraiser, he’s planning a bake-off amongst Salop Leisure staff to coincide with Macmillan’s World’s Biggest Coffee Morning on September 30.

Anyone wishing to support Max can donate money by clicking here.

Picture caption: Max Ball with his dad Steve and the t-shirt he has had printed for his series of challenges.