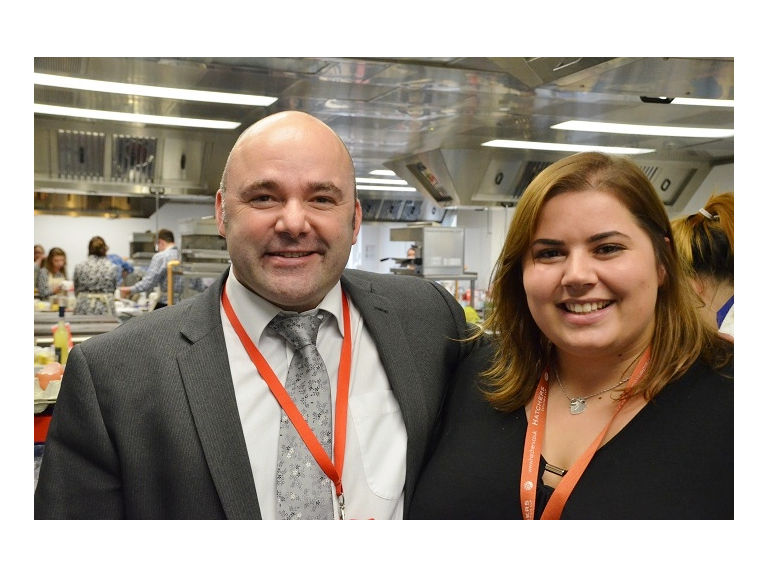 Nearly 20 local businesses from Shropshire gathered at Shrewsbury College this week to fight it out against the clock in a charity bake off - with no soggy bottoms in sight.

The event, inspired by the popular BBC One show ‘The Great British Bake-Off’, was organised by Hatchers Solicitors and hosted at Shrewsbury College’s skills kitchens. It saw 18 teams of local businesses, including, Halls, Reech Media Group, Balfours, Brewin Dolphin and Savills among many others, undertake two separate trials over four hours , including the daunting ‘technical’ and impressive ‘showstopper’ challenges.

Kicking off early afternoon in the two industry-standard, fully equipped skills kitchen, the bakers spent four hours prepping and cooking in the technical challenge, making Shrewsbury biscuits and a showstopper of their choice. After a busy afternoon in the kitchens the bakers relaxed in Origins restaurant with a night of drinks, nibbles and prize-giving.

Commercial Manager, Ted Coxon, said: “It’s been a fantastic day, this is the first big event that we have hosted in our skills kitchens, which we have recently opened for hire to the general public for just this sort of occasion or training It’s been a great opportunity to get local businesses together for an afternoon of fun and all for a good cause. We hope the College can continue to host and support similar events for the community.

Hospitality & Catering students from Shrewsbury College, Georgia Holmes, 18 and Ruby Urquhart Jones, 17, both from Telford, paired up to compete in the days event.

Georgia, said: “We have made the Shrewsbury biscuits, which we all had to do as part of the technical challenge and for our showstopper we made a  cake rendition of ‘afternoon tea’, with lemon Shrewsbury biscuits, chocolate gateau and Victoria sandwich cake, cut into the shape of sandwiches.

“We have been working on and planning our bakes for about three weeks. It’s been good fun taking part in an event like this as it is something different and extra experience.”

Jessie Hinds, marketing coordinator at Hatchers, who organised the Bake-off, said: “It was a fantastic day, the idea for this event was born after a few drinks at the Shropshire Business Awards.

“Our team spaces were filled within 72 hours and unfortunately we had to turn quite a few teams away. Everyone had a great deal of fun and it was great to be raising money for charity at the same time. I think we proved that Shropshire Businesses really are great.”

The first prize was scooped by the Kelly Beasty and Louise Taylor from team, The Reprobakes, from Hatchers. They were awarded with their very own glass cake stand award.